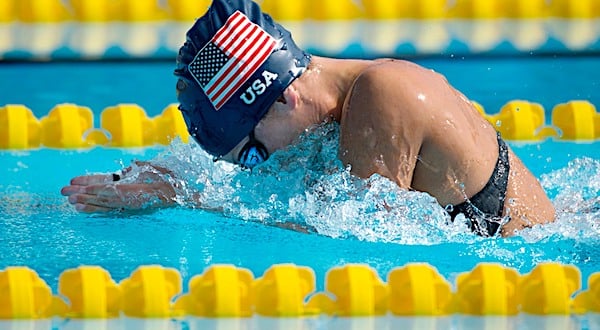 Lia Thomas, 22, competed as Will Thomas for several years on the University of Pennsylvania men's swim team.

Now Thomas is breaking records – on the women's team.

And the situation has triggered another round of fights over the idea that men can become women, and also that they should be allowed to compete against biological women.

Following the science, it does not happen, as being male or female is embedded in the human body down to the DNA level.

But that doesn't stop activists from claiming transitions, societal or surgical, actually make that person another gender.

Thomas recently "raced away" from other competitors at the Zippy Invitational event in Akron, Ohio, winning the 1,650-yard freestyle by 38 seconds, according to the Daily Mail.

Thomas' time of 15:59.71 was a record for the meet. And the pool where it happened. And it followed victories in the 500-yard freestyle as well as the 200-yard freestyle.

The Daily Mail reported the problem is, "Her success, though, has drawn criticism from some claiming she has an unfair advantage, as those who were born male tend to have longer limbs, larger hands and feet, along with greater upper-body strength."

On social media, Jessica Cole explained, "This should outrage every person who's ever advocated for women in athletics." and Claude Gregory added, "A disgrace for all the hard-working female swimmers."

The athletics department at Penn, however, promotes Thomas as a potential "All-American, or even national champion."

The arguments are all part of a firestorm that has swept across the nation, and around the globe, in recent months and years.

Just recently Laurel Hubbard, who said he went from male to female, competed in the Tokyo Olympics, failing to complete a single lift in the weightlifting competition.

Thomas' success, the Daily Mail said, "has reignited the debate, as she was a key component in her team's success in the 400m freestyle relay, and she swept the board when it came to 100m, 200m and 500m freestyle individual events."

The reaction to the issue has mostly been on the state level, such as the law signed by Texas Gov. Greg Abbott only weeks ago that requires athletes in public schools to compete as the sex listed on their birth certificate.

Texas was not the first state to establish that requirement.

Columnist John Stossel reported how mountain bike racer Leia Schneeberger just wants "to be able to compete on a fair playing field," and not against a "male body."

He quoted biologist Emma Hilton, who found in a study that "in most every category, men are much stronger."

"A male could be 40% stronger than a female on his legs," she said. "Things like shoulder width don't change when transgender women suppress testosterone. They don't get shorter. Their hearts don't get smaller. They've still got big lungs. The performance gap in weightlifting is over 30% ... throwing a baseball over 50% ... when a male punches, 160%."

The Western Journal reported recently on a poll that shows 62% of respondents said transgender athletes should be allowed only on sports teams that match their gender they were born as.

The fights already have arrived in federal courts.

Two Idaho State students are opposing a lawsuit by the American Civil Liberties Union that demands the state abandon its "Fairness in Women's Sports Act."

Under President Trump, even the U.S. Justice Department signed a statement of interest arguing against the policy of the Connecticut Interscholastic Athletic Conference that allows athletes to compete against whichever gender they choose.

Joe Biden immediately abandoned such positions when he became president.