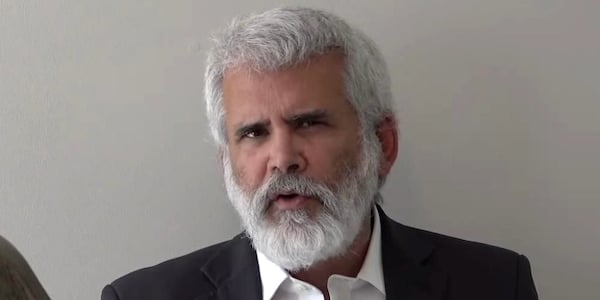 In a wide-ranging video interview with WND, the vaccine researcher who invented the messenger RNA technology behind the Pfizer and Moderna shots explained why he opposes universal vaccination for the COVID-19 virus and why he's been willing to risk the reputation he's cultivated over three decades and weather the scorn of the government and health-care establishment.

Dr. Robert Malone cited the evidence for his concerns about the vaccines, the mandates and policies he believes are causing serious harm, particularly to children, but he also offered insight on his personal journey during the pandemic that has rocked the world.

Unknown to most critics and allies alike, he said in the 80-minute interview, is that he's not "right wing."

"My wife and I are Central Coast Californians by birth and youth, and we actually come from slightly center-left on the political spectrum," he told WND.

"But I've got to say, what we've observed live the last two years has completely changed our point of view on politics in the United States.

"And the thing is, I'm seeing that all across the country."

Malone noted he's been on podcasts with African Americans and others traditionally on the political left "who are really not happy with what's happening at all."

"I'm pretty sure what I'm seeing is a major political realignment starting to grow in the United States, and really worldwide, and it's like a wakeup call."

It's about the rights of the individual and the fundamental freedom of speech upon which the nation was founded, he said.

"This is scrambling politics," said Malone of the pandemic, predicting – while acknowledging such prognostications are outside of his "core competency" – a "major sea change in the 2022 midterms."

'It's hurting people'
Malone said the reason he is speaking out, in spite of the considerable personal risks, is simple.

"It's because I'm bloody well pissed off. It's not right, it's not fair, it's hurting people, it is breaking the rules, left and right, people are lying continuously, they're manipulating data," he said.

He believes the consequences will be fundamental, with a "damaged" hospital and medical-care delivery system and a loss of faith in the government.

The insertion of the government in the affairs of the family, with the lockdowns, school shutdowns, and the vaccine and mask mandates, is causing damage that is "deep and profound and will last for decades," he said.

"Evil can sometimes be intentional, and sometimes it's unintentional, but right now what we're seeing happening with our children is fundamentally evil," he said.

"It's just a question in my mind to what extent it's been intentional. And I hope it hasn't been."

Malone discusses two major efforts in which he serves, as WND reported earlier this week, the grassroots Unity Project opposing vaccine mandates and the International Alliance of Physicians and Medical Scientists that was launched by the Global Covid Summit.

'Rushed out the door'
Some of Malone's critics have insisted he's either lying about or embellishing his role in the development of mRNA vaccine technology.

He explained that he didn't invent mRNA, which is a fundamental biomolecule, but he did invent the idea of using mRNA as a drug, along with a "whole suite of technologies that enables that, demonstrating the proper structure of the mRNA, the method of production, the purification, the assembly of all those parts."

And he had "the brainstorm" that it could become a new pathway for producing biomolecules and be used as a gene therapy for vaccination.

Ultimately, he argued, "inventorship" is established by the U.S. Patent and Trademark Office, and not by "fact-checkers that haven't graduated from college yet" or journalists.

His big concern is that the experimental vaccines have been "rushed out the door" without the measures and the time that previously have been employed to ensure safety and efficacy.

As a 30-year veteran of vaccine development, he decried "the things that Pfizer is getting away with, the data manipulation, the flat-out fraudulence in some of the clinical trial data."

"If I pulled those tricks, I would be barred from clinical research in the future," he said

"It's not right in terms of ensuring safety and efficacy for the world's population."

He called the COVID-19 vaccine rollout the "largest experiment being done on human beings, and it's being done in a haphazard way that is violating all the norms for how clinical research, advanced development and regulatory affairs are supposed to be managed."

'Wrong think'
Malone said he has known White House coronavirus adviser Dr. Anthony Fauci for 30 years and has gone "toe to toe" with him at various times over that period of time.

The vaccine researcher shrugs off the criticism from public health officials and others, arguing that many of his conclusions and claims were "heresy" and "wrong think" six months ago but increasingly have become "accepted dogma."

Among the "former heresies" are his claims about the toxicity of the spike protein in SARS-CoV-2, the "shell game" with Pfizer's licensing of its Cominarty COVID vaccine and the vaccine risks to children.

"I chose that as the hill I would die on, to do everything I could to keep from mandatory vaccination of children," he said.

He also made, in early 2020, the "risk assessment that we didn't have time to build a vaccine that was going to be safe and effective and we needed to focus on repurposed drugs."

He first began to focus on repurposed drugs on Jan. 10, 2020, when the virus sequence – then called the Wuhan seafood market virus – was first uploaded.

Malone also came up with the mast cell hypothesis, the inflammatory cascade basis for the pulmonary damage caused by the virus.

A big concern has been the "hunting down" and "driving out" of physicians who push back against efforts to curb their ability to treat patients and save lives.

No longer the gold standard?
Malone noted he was at a roundtable in Lisbon, Portugal, with about 50 "thought leaders" – politicians, medical professionals and journalists.

One of the participants asked, in Malone's words, during the Q&A: "Dr. Malone, we've always believed that the CDC and the FDA were the gold standard worldwide for health and pharmaceutical regulation. And what we've learned through this is that they are corrupt, and we can no longer rely on them."

Malone said that statement "hit me like a brick in the head."

"I hadn't really realized up until that point that what we've done is gone through this insane rushing of pushing something out that is not safe and is not effective, and breaking all the rules. And pushing it on the rest of the world through all kinds of means," he said.

"What we've done is compromised the world's belief in the integrity of the American system for regulating drugs and biologics."

He sees a movement in the global pharmaceutical industry away from the United States and toward China and India.

Public trust in the U.S. has been "deeply, deeply damaged," he said.

Malone was asked his assessment of the new omicron variant.

The early indication, based on limited data, is that it appears to be less pathogenic, or dangerous, than the delta variant and potentially more infectious.

"It's absolutely the trajectory that we would hope might occur as time passes with this virus that is now firmly in our population and we will never eradicate," he said.

Bio
Malone, who holds numerous patents in the fields of gene delivery, delivery formulations and vaccines, has about 100 peer-reviewed publications and published abstracts and about 12,000 citations of his peer reviewed publications, according to Google Scholar, which gives him an "outstanding" impact factor rating. He he has sat on or served as chairman on numerous National Institute of Allergy and Infectious Diseases and Department of Defense study sections.