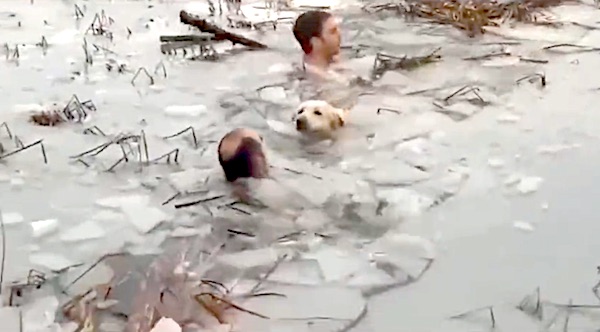 Police officiers swim through a frozen lake in Spain to rescue a trapped dog. (Video screenshot)

Police officers in Spain swam through a frozen lake to save a golden retriever Wednesday ahead of expected snowstorms.

The two officers, stripped down to the waist, can be seen breaking up chunks of ice at the lake’s surface and wading through the frigid waters to save the dog who, according to Reuters, had been trapped in the frozen lake for several hours.

The police received a call about the dog stranded in the reservoir at 11 a.m. Wednesday, according to the Spanish law enforcement.

The first man to enter the lake used a large stick to break up the frozen surface as he waded in deeper. The dog initially swam away from the men before turning to swim toward them. The men can be seen guiding the dog out of the lake at the end of the video.

“It is not just a dog. It is knowing that you always are and will be there for whatever it takes,” David Arranz, a local lawyer, commented on Twitter. “Infinite pride. Always.”

The officers are part of the Jaca post of Spain’s Guardia Civil in the province of Huesca, according to Euro Weekly News.