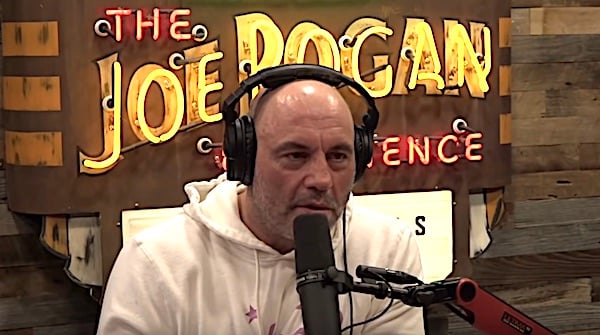 The controversy over Joe Rogan airing a total of nearly six hours of conversation with two highly educated and accomplished health scientists whose views contradict the evolving government and establishment media narrative on COVID-19 opened a new chapter Monday, with the No. 1 podcaster pledging to do his best to group together interviews with people who have opposing opinions.

Rogan's 10-minute video on Instagram has been interpreted in various ways, including as an apology for spreading "misinformation" arising chiefly from an interview with Dr. Peter McCullough that drew more than 40 million views and another with Dr. Robert Malone that garnered an additional 50 million.

But Rogan -- while acknowledging what his platform Spotify has had to suffer financially with the withdrawal of the music of Neil Young and Joni Mitchell in protest of his interviews -- made it clear he has a problem with how the term "misinformation" is being used.

He pointed out that "many of the things we thought of as misinformation a short while ago is now thought of as fact." They include claiming people can catch COVID-19 vaccination, saying cloth masks don't work and suggesting it's possible the pandemic originated in a lab in China. Previously, those statements, which are now accepted, got people removed from social media platforms, he pointed out.

He said his aim with his program has been "to create interesting conversations, and ones people enjoy."

"If I've pissed you off, I'm sorry. And if you enjoy the podcast, thank you," he said.

Nevertheless, Rogan promised to "do my best in the future to balance things out."

"If there's anything that I've done that I could do better, it's having more experts with differing opinions right after I have the controversial ones," Rogan said.

In fact, he pointed out that prior to his conversations with Malone and McCullough, he interviewed people who espoused the establishment view of the pandemic, including Drs. Sanjay Gupta, Michael T. Osterholm and Peter Hotez.

The Instagram video came after Spotify announced Sunday it will add a content advisory to any podcast episodes that address COVID-19.

Rogan said he accepts the decision, but he won't stop interviewing people with controversial opinions.

He explained that he decided to speak with McCullough and Malone because they are "very highly credentialed, very intelligent, very accomplished" and have views of the pandemic that "differ from the mainstream narrative."

"I wanted to hear what their opinion is. I had them on and because of that, those episodes were labeled as dangerous," he said.

He pledged to "balance out these more controversial viewpoints with other people’s perspectives so we can maybe find a better point of view.:"

"I don’t want to just show the contrary opinion to what the narrative is; I want to show all kinds of opinions,” on all topics, and not just COVID-19,"  Rogan said.

He thanked Spotify for its support amid the controversy and said he was grateful even for the haters, who prompt reassessment and help put things in perspective.

"When it comes to how we root out the misinformation in society right now and get people access to accurate information," Murthy said, the focus should be on social media platforms.

"These platforms still have not stepped up to do the right thing, and do enough, I should say, to reduce the spread of misinformation."

In a panel Monday on CNN, Brian Stelter and Oliver Darcy characterized Rogan's listeners as people who have an unhealthy diet of junk food.

Writer Kat Rosenfield, regarding herself as among the "enlightened," agreed.

"Here is people who, they like something that we — you know, who consider ourselves more enlightened — don’t think is good for them," she said. "We think that they're internalizing this misinformation, that they're using it to make bad decisions."

Rosenfield: "Here is people who, they like something that we — you know, who consider ourselves more enlightened — don’t think is good for them, we think that they’re internalizing this misinformation and using it to make bad decisions …" pic.twitter.com/aFkoAWHFje

In a lively conversation Monday about Rogan's Instagram video on ABC's "The View," the co-hosts questioned whether shutting down interviews with people such as McCullough and Malone would amount to censorship.

"Where is the line?" asked co-host Whoopi Goldberg. "Is it censorship when the information is potentially harmful to people?"

See the conversation on "The View":

A former co-host of "The View," Meghan McCain, said anyone who has a problem with Rogan should ponder why so many Americans have abandoned establishment media and are listening to the lengthy, thoughtful conversations the comedian and martial arts champion conducts with a variety of people from all walks of life.

I think a lot of people are really missing the point.

Ask yourself why so many Americans have fled mainstream media and gone to Joe Rogan. He gets 100 million listeners a month and Jim Acosta can’t even break half a million in primetime.

Why doesn’t anyone trust you anymore?

Similarly, New York Times reporter Matthew Rosenberg argued that Rogan "is what he is."

"We in the media might want to spend more time thinking about why so many people trust him instead of us," he wrote on Twitter.

Nikole Hannah-Jones, the creator of the 1619 Project, which contends America is founded fundamentally on racism and bigotry, reacted to Rosenberg.

"With respect, I don’t get this," she said. "We need to understand why millions of Americans don't mind the open racism? It’s not a mystery. Been reporting on it for years. So, what do we do with that?"

Prominent science writer and agnostic Michael Shermer, known for his collegial debates with believers in God, said the claim that Rogan and his guests are "intentionally spreading misinformation" is wrong.

"They don't think what they're saying is misinformation — They think they have a valid point," he wrote on Twitter. “They may be wrong but that's different. Instead of accusing them of lying, explain why facts say otherwise."