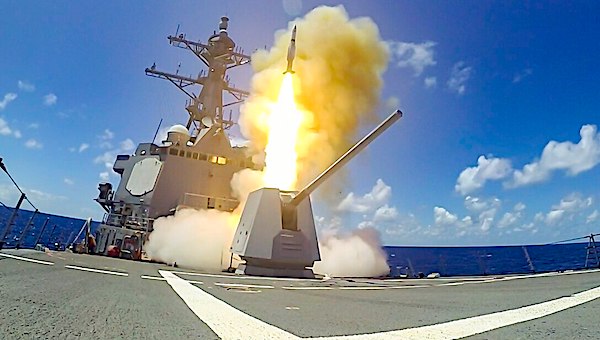 A missile launches from the USS Chung-Hoon during Rim of the Pacific in the Pacific Ocean, Aug. 26, 2020. (U.S. Navy photo by Petty Officer 1st Class Devin Langer)

Citing a growing gap in non-strategic nuclear capabilities compared to Russia and China, the 2018 Nuclear Posture Review deemed it essential to develop two new systems: a low-yield warhead for a submarine-launched ballistic missile and a sea-launched cruise missile. Four years later, the need for those programs is even more pronounced, as both China and Russia field dramatically more and better nuclear weapons.

Yet, incredibly, the Biden administration is reportedly contemplating cutting these two nuclear capabilities as part of its anticipated Nuclear Posture Review.

President Biden has made no secret of his desire to reduce the role of nuclear weapons in U.S. strategy. Cutting U.S. nuclear capabilities could demonstrate a commitment to this approach and placate those in his party who hold similar views. Yet decisions about our nation’s security should be based on more than satisfying personal desire or political expediency.

As the Pentagon has advertised, the Nuclear Posture Review should be “informed by the current and projected global security environment.” A review that eliminates these non-strategic nuclear capabilities would fail to meet that pledge, as evidence of our adversaries’ malign intentions continues to mount.

Non-strategic weapons are usually shorter in range and lower in yield. They are useful in escalating regional conflicts, which is why both Russia and China are building up their arsenals of tactical nuclear weapons.

Indeed, Russia incorporates the use of these weapons into its warfighting doctrine, where they may be employed to compel the U.S. to back down in an escalating conflict. Intelligence indicates that Moscow may consider new weapons deployments as tensions ramp up over Ukraine. An escalating regional conflict is not an implausible scenario; it is happening right now.

While China’s intentions are less known, its behavior is unmistakable. Beijing has stepped up its aggression in the Taiwan Strait. Should conflict break out, its regional nuclear missiles would provide a useful backstop to its conventional forces.

The U.S. arsenal of non-strategic nuclear weapons pales in comparison to those of our adversaries. They deploy these weapons on a diverse range of platforms. Russia has thousands. The United States maintains only a couple hundred tactical gravity bombs deployed in Europe and no nuclear weapons in the Indo-Pacific region. In the eyes of Moscow and Beijing, this could suggest the U.S. lacks a credible nuclear deterrent at the lower levels of the escalation ladder.

Deployment of the low-yield warhead on ballistic missile submarines in 2020 provided some modest, near-term relief to this problem. It gave the President a more proportional option to credibly deter Russian and Chinese limited nuclear use.

The sea-launched cruise missile, now in its earliest stages of development, would further address this threat because it can be deployed on attack submarines directly to a region of conflict, rather than on strategic ballistic missile submarines, which remain far out at sea. A regionally-present nuclear weapon would help remove any Russian or Chinese misperception that the U.S. would not be able to retaliate for limited nuclear strike with a strategic weapon of its own.

Some have asserted that these capabilities will lower the threshold for nuclear war because they are more “usable.” Yet the opposite is true. Developing low-yield, regional weapons would help convince our adversaries that any limited nuclear strike will be met with a proportional response, dissuading them from considering one in the first place.

Otherwise, eliminating these programs would cede advantage to our adversaries in an arena of competition where they are already winning. Doing nothing in response to China’s and Russia’s non-strategic arms buildup would only reinforce their view that expanding their nuclear forces provides them with a military advantage.

And for that reason, arms control efforts can’t be a valid justification for such cuts either. Russia and China will have less of a reason to negotiate if the U.S. is going to remove capabilities, anyway.

Formulating policy based on political promises is nothing less than reckless when it makes us less secure.

Hopefully, Biden’s Nuclear Posture Review will conclude that the current threat environment does not justify eliminating these weapons programs. If these weapons are axed, it would be on the altar of political expediency, not because of an objective threat assessment.