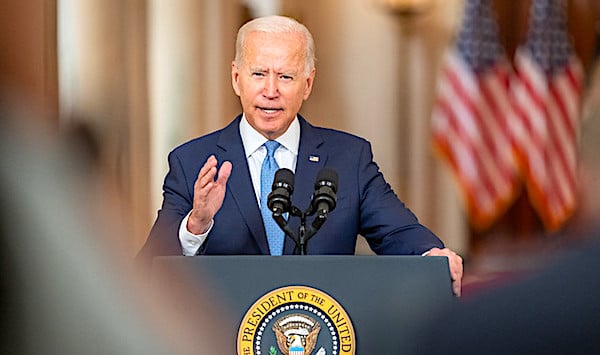 The Biden administration is pressing – hard – for those body mutilations that are promoted by the transgender community to be easier for anyone to get.

Eleanor Bartow, the features editor at the Federalist, explains in a report there that Biden is working to accomplish this by requiring insurers to cover surgeries – as well as hormone therapy and more.

"Discrimination based on race, color, national origin, sex, age, or disability is prohibited in federally funded health-care facilities under the Affordable Care Act, passed during the Obama administration," the report said. "A proposed rule, issued by the U.S. Department of Health and Human Services on January 5, would add 'sexual orientation and gender identity' to that list."

Bartow, whose has written for the Daily Caller, the American Enterprise Institute, the Congressional Quarterly and more, explained the rule puts "ideology ahead of sound medicine," according to the Ethics and Public Policy Center.

There are some insurers who already cover the procedures, and taxpayers in some cases fund the operations through Medicaid.

But "Nearly half of transgender respondents in one survey said their health insurance company denied them gender affirming [sic] surgery, and a similar proportion reported that they were denied coverage for hormone therapy," the proposed rule claims.

Roger Severino, a senior fellow at EPPC, said in the report the rule appears to offer no exclusion for children, meaning it would "put kids on a transgender treadmill and they don’t get off."

The results could be children victimized by puberty blockers and hormones when they find they are sterile, and have done bodily damage.

Severino, who was in the HHS Office for Civil Rights under President Trump, told The Federalist that imposing the rule and requiring insurers to cover the body modifications would make it harder for children to sue later.

The EPPC has documented, "It is well known that symptoms of gender dysphoria in children naturally resolve with little to no intervention in 61-98% of cases and that once a child is placed on transition, including through medical intervention, the odds of persistence skyrocket."

The EPP continued, "A significant number of women have persistent emotional and psychological distress because of their breast size, which helps explain why breast augmentation is the leading cosmetic surgery procedure in America."

But it, like hair loss for men, is usually considered cosmetic.

But Severino said the rule change would impact that, and leave "no limit" on the surgeries someone could demand.

Bloomerg estimates transgender surgeries can range up to $100,000, in addition to hormones, voice therapy and more.

Other points raised in the report include that advocates claim the community's mental health would improve and there would be reduced suicide risk.

Yet the EPPC found, "studies purporting to show better mental health outcomes from social and medical transition while framing alternative psychotherapeutic approaches as per se harmful are seriously flawed."

And experts note more than half of people who decide to "detransition" say they got inadequate mental health care before their earlier decision.

Bartow wrote about a demand that already has made its way into Colorado procedures, which now "explicitly" demands coverage of "gender-affirming [sic] care services."