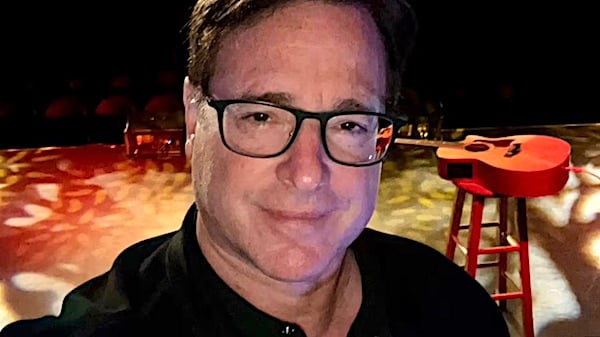 ORLANDO, Florida -- Stand-up comedian Bob Saget, known for his roles on "Full House" and "America's Funniest Home Videos" was found dead Sunday in a Florida hotel room. He was 65.

"Earlier today, deputies were called to the Ritz-Carlton Orlando, Grande Lakes for a call about an unresponsive man in a hotel room," the Orange County Sheriff's Office tweeted.

"The man was identified as Robert Saget & pronounced deceased on scene. Detectives found no signs of foul play or drug use in this case."

Earlier today, deputies were called to the Ritz-Carlton Orlando, Grande Lakes for a call about an unresponsive man in a hotel room. The man was identified as Robert Saget & pronounced deceased on scene. Detectives found no signs of foul play or drug use in this case. #BobSaget pic.twitter.com/aB1UKiOlmi

A sheriff's spokesperson also said, "We have no information on cause of death, and detectives have found no signs of foul play or drug use in this case."

"This is all the information we have for release at this time and we do not anticipate further updates. The Medical Examiner's Office will ultimately determine cause and manner of death."

Saget was in Orlando Sunday following a performance on Saturday night in Jacksonville, Florida, as part of his "I Don’t Do Negative" standup tour.

"Loved tonight's show @PV_ConcertHall in Jacksonville. Appreciative audience. ... I had no idea I did a 2 hr set tonight. I'm happily addicted again to this sh**," the comic wrote in his final tweet.

Friend and fellow comedian Gilbert Gottfried tweeted: "Still in shock. I just spoke with Bob a few days ago. We stayed on the phone as usual making each other laugh. RIP to friend, comedian & fellow Aristocrat Bob Saget."

Still in shock. I just spoke with Bob a few days ago. We stayed on the phone as usual making each other laugh. RIP to friend, comedian & fellow Aristocrat Bob Saget. pic.twitter.com/TDKT8JoULq

Adam Sandler tweeted: "Great man. Funny as hell. Such a nice person. Love to Bob and his whole family."

Comedian Jim Gaffigan tweeted: "OMG! RIP. What a warm kind man we lost. The world has lost one of the nicest."

Through his performance as Danny Tanner, as well as his role as the host of "America's Funniest Home Videos" from 1989 to 1997, Saget cultivated an image as the wholesome paterfamilias, despite his roots as a stand-up comedian who worked blue for much of his career.

He definitively shed that image with his cameo role as a drug addict in the 1998 cult classic Half-Baked, as well as his appearance in the 2005 documentary "The Aristocrats," which features an appearance from him telling a particularly raunchy version of the titular joke.

Saget also helped shed his clean-cut image with a recurring appearance on the HBO series "Entourage," in which he played a boorish, philandering, cigar-puffing version of himself. Saget's performance on "Entourage" appeared to be a nod to the chasm between the actor's actual personality and his wholesome Danny Tanner persona, a discrepancy he enjoyed playing with throughout his career. "People ask, 'Who are you more like, the 'Full House' guy, or the guy on 'Entourage.'" I'm somewhere in between," he told NJ.com in 2013. "I've been in my back yard with a robe on, smoking a cigar, unshaved ... but I'm not a misogynistic guy like that badass. That’s just a two-dimensional character. That's just a character. I'm neither of those."