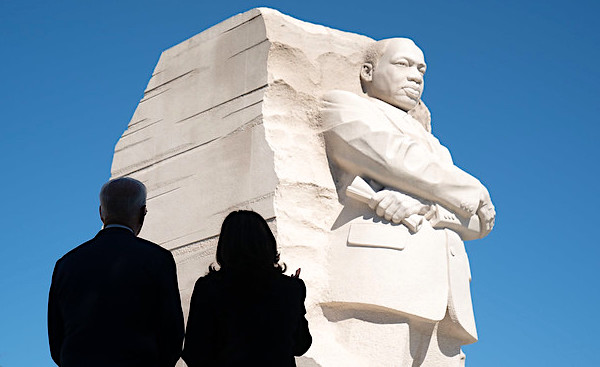 Joe Biden has arranged to promote his demand that Congress make the Democrat agenda to take over elections nationwide law by making an appearance in Atlanta with Kamala Harris, and visit civil rights shrines like Martin Luther King Jr.'s memorial.

But he's being boycotted by even his own allies on the agenda, points out Washington Examiner columnist Byron York, which, he says, is a "pretty impressive trick."

Biden, York explained, "will travel with Vice President Kamala Harris, the first person of color to serve as vice president. He will visit civil rights shrines such as the Martin Luther King Jr. memorial and Ebenezer Baptist Church. And all the while, he will be boycotted by some of the civil rights groups he has allied with in the campaign for a new Democratic voting bill."

He reports the groups have rejected being used as "props" by Biden.

"That is not a warm welcome," York said. "Just look at the New York Times headline: 'Voting Rights Groups Skipping Biden's Speech in Georgia Over Inaction; Stacey Abrams, the Democratic candidate for governor, also will not be there, but she cited a scheduling conflict.'"

The commentary pointed out that even Abrams, "the Democratic hero who has taken the lead in directing baseless charges of 'voter suppression' at Republicans," won't be there.

Because of a scheduling conflict.

York explains the groups are "mad" because there's been no progress by the Biden administration on their agenda to take over all voting procedures nationwide "on terms favorable to Democrats."

They issued a statement explaining Georgia voters voted for Democrats in the White House and Senate, but "In return, a visit has been forced on them, requiring them to accept political platitudes and repetitious, bland promises. Such an empty gesture, without concrete action, without signs of real, tangible work is unacceptable."

Biden, in fact, had campaigned on the idea of a big voting bill to cater to Democrat interests, but then, in office, focused on spending trillions of dollars. The "COVID relief" price was nearly $2 trillion, and there was a $1.2 trillion "infrastructure" bill.

His trillions more in spending plans, in "Build Back Better," still is stalled.

"And only now, now that Build Back Better has hit a snag, has he returned to the voting bills," York explained. "And he wants to use the bills' supporters as a backdrop for a big photo op in Georgia, which top White House aide Cedric Richmond called 'the belly of the beast, or ground zero, for voter suppression, voter subversion, and obstruction.'"

"The boycott is irrefutable evidence that Democrats are divided on Biden and on his push for a voting bill. And with his spending bill in limbo, the Atlanta voting debacle is more evidence that Biden's entire agenda has lost steam," he concluded.