As we watched fireworks on New Year's Eve night, I walked up to a few police officers posted to keep peace at the event and thanked them for their service. As I did, I thought again about how hundreds of thousands of them put themselves in harm's way every day when they go to work. It happens even during a good ol' fashioned small town New Year's celebration.

It made me recall the close call of a sheriff on New Year's Eve night in 2020, as reported by Fox News. Did you hear about that amazing moment?

Ohio Sheriff Matt Treglia was out in his cruiser, attempting to record proof of the local tradition of celebratory gunfire. That's when the proof came right to him.

A few moments after midnight, Treglia was standing outside his car. As he was shooting video with his phone, a bullet ricocheted off his cruiser, hitting his chest and bounced off of his tactical vest. It barely missed the face of Major Todd Mohler, who was sitting nearby.

"What the [bleep] was that?" Treglia can be heard exclaiming.

Treglia said, "It took me a minute to realize we weren't being targeted."

The Allen County Sheriff's Department posted the video as a warning to the surrounding community to potentially avert another tragic accidental death. It noted: "What goes up, must come back down. Shooting any type of gun into the air is extremely dangerous and illegal. Please, handle any and all firearms safely and responsibly."

Treglia's incident ended well, but it could have ended tragically. Many others do, and they're not accidents. They're felony violent crimes.

Here is just a very small sample of the tragic stories that happened in the same year to our men and women in blue:

It's unbelievably tragic how many law enforcement officials fall in the line of duty every year in the U.S.

According to the National Law Enforcement Memorial Fund website, "Since the first known line-of-duty death in 1786, more than 22,000 U.S. law enforcement officers have made the ultimate sacrifice."

In 2020, 295 officers died in the line of duty. In 2021, a staggering 458 officers paid the ultimate sacrifice. Pause to think about that number again. One is too many; 458 is a sign of a wayward and lawless nation in which too many people oppose law and order.

This is how U.S. peace officers' deaths, assaults and injuries look over just the past decade: 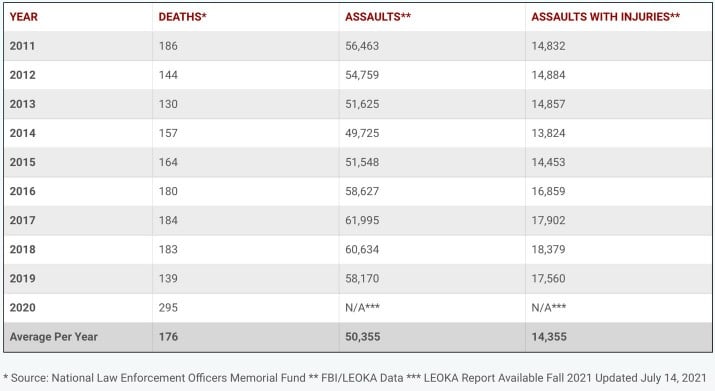 Far, far more than mere statistics, these are mothers, fathers, sisters, brothers, sons and daughters, true patriots and the best of the best that America has to offer. Please take a moment to consider the number of recently fallen heroes in your state. Then, look at the photos of those fallen warriors and read their stories at the Officer Down Memorial Page.

This hits a little close to home because I am very pro-law enforcement, have many friends who are amazing officers, and I am even an honorary Texas Ranger. I also married a cop! My wife, Gena, is a former Correctional Corporal and Level 2 Reserve Deputy Sheriff from her hometown in Northern California. She's even more pro-law enforcement than I am!

The truth is, most of the time across the country, injury occurs between cops and civilians not because cops have a power problem but because civilians are breaking the law. If they obeyed the laws of the land or paused to respect the badge a little bit more, the injuries to both civilians and law enforcement would be miniscule.

Even the Good Book says, "For rulers hold no terror for those who do right, but for those who do wrong. Do you want to be free from fear of the one in authority? Then do what is right and you will be commended. For the one in authority is God's servant for your good. But if you do wrong, be afraid, for rulers do not bear the sword for no reason. They are God's servants, agents of wrath to bring punishment on the wrongdoer. Therefore, it is necessary to submit to the authorities, not only because of possible punishment but also as a matter of conscience."

Even more apropos are the words of our Savior whose birth we celebrated on Dec. 25 and whose words remind us of the sacrifice He and many of our law enforcement make: "Greater love has no one than this: that one lay down his life for another."

Do you remember small-town police chief David Dorn, who was a 77-year-old African-American retired St. Louis police officer who served 38 years on the force? When Gena and I heard he was shot and killed by looters at a pawn shop for doing nothing more than protecting that local business, we said, "Enough!"

When peaceful protests give way to crimes of looting, riots, destruction and even a wave of retaliation and injury against good peace officers, we are fueling the fires of division rather than extinguishing them.

This isn't rocket science. Vengeance and vigilantism are as degrading as racism. They are both wrong. The calls to defund and dismantle police departments are a call for anarchy and societal chaos. The escalation in violent crimes across every major city in America is proof less law enforcement isn't helping but hurting us. Our founders' idea of freedom was not one absence of law and order. We are better than that, America, or should be.

If America is ever to heal its divisions in a longstanding way, both sides of the aisle have got to reestablish in their hearts and minds the incredible worth of humanity in all of us. It's about far more than superficial respect; it's about supernatural value and love.

In my New York Times bestseller, "Black Belt Patriotism: How to Reawaken America," one of my favorite chapters is "Reclaiming the Value of Human Life." I think it's worth the price of the entire book, especially because I believe it holds a remedy far more powerful than protests, and it goes back to the beginning of our republic.

The value of human life has not always fluctuated from person to person like it does today. Most early Americans believed humans were the highest creation of God. Only they were made in His image.

Back then, there were two codes that shaped and reflected most people's view of humanity: that God created all of us, and that we all were created equal. Their views were based in the Bible and expressed in the Declaration of Independence: "We hold these truths to be self-evident, that all men are created equal, that they are endowed by their Creator with certain unalienable Rights, that among these are Life, Liberty and the pursuit of Happiness."

Those words in America's founding document were actually derived from the declaration in the Bible: "Then God said, 'Let Us make man in Our image, according to Our likeness';… And God created man in His own image, in the image of God He created him; male and female He created them." (Gen. 1:26-28)

Dr. Thomas G. West, professor of politics and author of "Vindicating Our Founders," explained that, "The Founders believed that all men are created equal and that they have certain inalienable rights. All are also obliged to obey the natural law, under which we have not only rights but duties. We are obliged 'to respect those rights in others which we value in ourselves' (Thomas Jefferson)."

The founders believed that their declaration of equality would eventually give legs to everyone's freedom, including slaves. Despite the embedded institution of slavery in their times, they knew what they established would one day set all men free, and it did. As Thomas Jefferson once said in a letter in which he addressed his desire for the abolition of slavery, "We have the wolf by the ear, and we can neither hold him, nor safely let him go."

Though rarely taught or even known today in public academia, most framers of the U.S. Constitution voiced their opposition to slavery, even though a large number of them owned them. According to the Gilder Lehrman Institute of American History, "Some, including Benjamin Franklin (a former slaveholder) and Alexander Hamilton (who was born in a slave colony in the British West Indies) became members of anti-slavery societies."

I'll say it again, if we are to value all Americans from peace officers to pastry makers, we've got to go back to the beginning of our republic and resurrect what the founding documents declared about all of us. It's our only way back to civility, decency, and law and order.

My hope and prayer for Americans in 2022 can be summed up in the words of George Washington from his farewell address: "Your Union [or unity] ought to be considered as a main prop of your liberty and … the love of the one ought to endear you to the preservation of the other."

Equally great is Jefferson's entreaty from his first inaugural address that we must "unite with one heart and one mind [and] restore to social intercourse that harmony and affection without which liberty, and even life itself, are but dreary things."

Gena and I wish all Americans, and particularly all law enforcement, a safe and prosperous new year, as we salute the red, white and true blue!

Chuck Norris
Chuck Norris is the star of more than 20 films and the long-running TV series "Walker, Texas Ranger." His latest book is entitled The Official Chuck Norris Fact Book." Learn more about his life and ministry at his official website, ChuckNorris.com.
Scientists put lie to Fauci claims denying U.S. involvement in Wuhan
When my hero faced off against real Russian assassins
Are Americans happy? You might be surprised!
Defending parents who refuse or restrict smartphones for children
It's the United (not divided) States of America
See more...