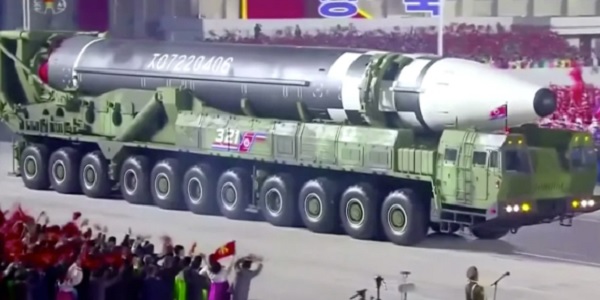 Two former Democratic congressmen contracted with a lobbying firm to advocate on behalf of South Korean businesses operating factories in North Korea, according to recent filings.

Former Democratic Missouri Rep. Lacy Clay joined law firm and lobby shop Pillsbury Winthrop Shaw Pittman on Wednesday to lobby on behalf of the Corporate Association of the Gaesong Industrial Complex (CAGIC) at the direction of South Korean consultancy HC & Sons, according to a foreign agent filing with the Justice Department. Former Democratic Texas Rep. Greg Laughlin, who has been with Pillsbury since 2004 and served in Congress for 6 years before switching parties, began lobbying on behalf of CAGIC in December 2021, filings show.

Pillsbury began working with CAGIC in July 2021, filings show, signing a $675,000 contract to provide services including “general advocacy, including meetings with U.S. Executive and Legislative Branches.” The firm will also “provide information to CAGIC and advocate on its behalf,” filings show.

CAGIC is a group of South Korean companies operating business facilities in Gaesong Industrial Complex, a special administrative zone located in North Korea in which South Korean businesses employ North Korean workers in factories and manufacturing plants, Voice of America reported. The arrangement between the two countries began in 2002 and was seen as mutually beneficial, generating revenue from North Korea, but it was suspended in 2016 following allegations by former South Korean President Park Geun-hye that the proceeds from the deal funded North Korean arms manufacturing.

Since the closure of the complex, CAGIC has pushed to reopen, arguing the suspension of the agreement adversely affects thousands of North Koreans previously employed at Gaesong facilities. However, UN sanctions prohibiting certain economic relationships between the two countries have complicated reopening efforts.

Clay and Laughlin will work on “public policy service” for CAGIC, according to their filings, which may include political activity such as “communications with Executive/Legislative Branch and media.”

It’s not clear whether Clay and Laughlin’s work will relate directly to existing sanctions or efforts to reopen the Gaesong Industrial Complex; Pillsbury did not respond to the Daily Caller News Foundation’s request for comment.

South Korean lawmakers have argued that the complex should be reopened to encourage cooperation and lessen tensions between North and South Korea.

“Reopening the Kaesong Industrial Complex is very critical to building trust between the US, South Korea and North Korea,” Rep. Song Young-gil, who heads Korea’s Democratic Party, said at the Aspen Security Forum in August 2021, according to the Korea Herald. “The Kaesong Industrial Complex has a very essential role in easing tensions between the two Koreas and is a very efficient way to change North Korea.”