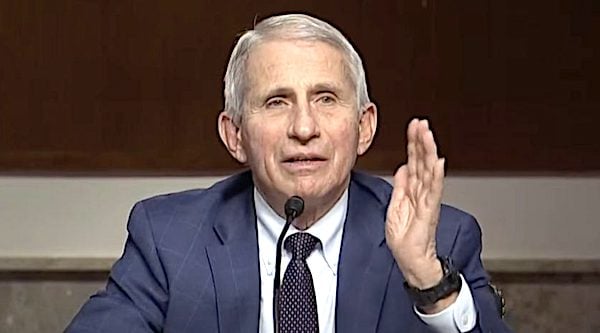 Evidence contradicting Dr. Anthony Fauci's repeated insistence that his government agency did not resume and fund dangerous "gain-of-function" research and that he mounted a campaign to shut down the scientific views of prominent epidemiologists lit up a Senate hearing Tuesday on the pandemic response featuring the White House coronavirus adviser and other top federal health officials.

Sen. Rand Paul, R-Ky., a physician, has repeatedly accused Fauci of lying about the role of his National Institute of Allergy and Infectious Diseases in the origin of the pandemic. The senator on Tuesday confronted Fauci with an email exchange released in December with then-National Institutes of Health Director Francis Collins. Fauci agreed to Collins' request for "a quick and devastating public takedown" of a declaration by three esteemed epidemiologists that challenged the federal government's COVID-19 policy. Collins referred to the Harvard, Stanford and Oxford medical scientists as "fringe epidemiologists."

At the hearing Tuesday, Fauci insisted Paul was distorting the facts and accused the Republican senator of being motivated by political gain, holding up a screenshot purportedly from Paul’s website of a donation page with an image that reads "Fire Dr. Fauci."

Further, email transcriptions released Tuesday by Republicans on the House Oversight and Government Reform Committee indicate Fauci knew about the financial relationship between NIAID, NIH, EcoHealth Alliance and the Wuhan Institute of Virology. And Fauci was warned of the possibility that the virus causing COVID-19 was genetically manipulated and that it leaked from the Wuhan lab.

Paul, at the hearing Tuesday, characterized Fauci as an "arrogant" career bureaucrat -- noting the NIAID chief's claim that he represents science itself -- who has used "government resources to smear and to destroy the reputations of other scientists who disagree with him."

The senator cited the email exchange in which Fauci agreed to the "published takedown" of the scientists, which Paul said "doesn't exactly conjure the image of a dispassionate scientist."

Fauci replied that "in usual fashion, senator, you are distorting everything about me."

Paul also referred to Fauci's assistance to EcoHealth Alliance founder Peter Daszak in casting the lab-leak theory of the pandemic's origin as an illegitimate "conspiracy theory."

"Senator, we are here at a committee to look at a virus now that has killed almost 900,000 people," he began, "and the purpose of the committee was to try and get things out, how we could help to get the American public, and you keep coming back with personal attacks on me that have absolutely no relevance to reality."

The White House coronavirus adviser asked chairwoman Sen. Patty Murray, D-Wash., for extra time to address "personal attacks" by Paul he insisted are not backed by "a shred of evidence."

"The last time we had a committee, or the time before, he was accusing me of being responsible for the death of 4-to-5 million people, which is really irresponsible," Fauci said.

Paul is making accusations, Fauci claimed, for political reasons, claiming the senator was distracting him and other officials from their jobs of addressing the pandemic while putting out misinformation motivating "crazies" to harass him and his family and threaten his life.

Fauci pointed to an incident Dec. 21 in which police arrested a man from California who said he was on his way to the nation's capital to "kill Dr. Fauci."

"So I ask myself, why would a senator want to do this? So go to Rand Paul's website and you see 'fire Dr. Fauci' with a little box that says 'contribute here,'" Fauci said, holding up a screenshot apparently from Paul’s website showing his face with the caption 'Fire Dr. Fauci.'"

"So you are making a catastrophic epidemic for your political gain," Fauci charged, addressing Paul again.

This is the GREATEST thing you'll WATCH today. LOL! pic.twitter.com/zhWHmrKAwb

Marshall began his questioning of Fauci saying the American people have lost trust in him, and "every day you are on TV, you do more damage than good when it comes to educating the public on COVID."

The Kansas senator then confronted Fauci with the new evidence that his agency funded gain-of-function research.

Fauci replied: "So, once again, senator, it pains me to have to point out to the American people how absolutely incorrect you are."

He argued that NIAID never funded the DARPA grant, but that is not the issue. Government documents obtained through a FOIA request and released in September included two grant proposals from the non-profit EcoHealth Alliance to manipulate bat coronaviruses at the Wuhan lab that were funded by NIAID. Among the documents are project updates, showing that work with Chinese scientist Shi Zhengli, the "bat woman," actually was carried out.

At the end of the exchange with Marshall, Fauci was caught on mic muttering "what a moron" and "Jesus Christ."