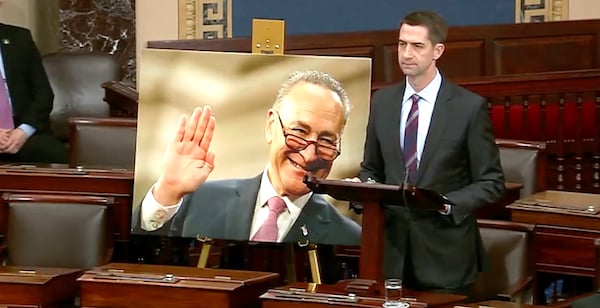 With Democrats moving to eliminate the Senate's requirement of 60 votes to advance legislation, Republican Sen. Tom Cotton took advantage Wednesday of the fact that when the Democrats were in the minority, they warned of grave consequences if the rule were eliminated.

Democrats are arguing that their voting rights bill is necessary to "save democracy" from "racist" state laws such as requiring voter ID, and, therefore, an exception should be made to the supermajority rule.

But Democrats used the filibuster a record-breaking 328 times during the 2019-2020 congressional term when they were in the minority, and Cotton seized on past passionate defenses of the rule by the current majority leader, Sen. Chuck Schumer.

Without telling his colleagues until the end, Cotton delivered a speech comprised entirely of past statements by Schumer.

"Right now we are on the precipice of a constitutional crisis," Cotton began. "We're about to step into the abyss."

He asked, using Schumer's words, "What is the crisis that calls for the undoing of two centuries of tradition?"

Cotton said it's "not the American people at large who are demanding the detonation of the nuclear option."

"The nuclear option is being pushed largely by the radioactive rhetoric of a small band of radicals who hold in their hands the political fortunes of the president."

He argued that the idea of requiring 60 votes to end debate rather than a simple majority is "embodied in the spirit and the rule of the Constitution."

The Founders were correct, he said, in their belief that the "slimmest majority should not always govern."

"The Senate is not a majoritarian body."

Cotton warned it will be "a doomsday for democracy" if the filibuster is eliminated.

He concluded: "Those are powerful words. But they're not mine. Every word of my speech today was originally spoken by our esteemed colleague, the senior senator from New York, Chuck Schumer."

The Arkansas senator, after hoisting a large image of Schumer onto an easel, said the majority leader "spoke so eloquently in defense of the Senate's rules customs and traditions when the fortunes of his party looked a little different."

"My how times have changed. Now it's Senator Schumer's fingers that are hovering over the nuclear button, ready to destroy the Senate over partisan advantage," Cotton said.

"Think about it, the narrowest majority in Senate history wants to break the Senate rules to control how voters in every state elect senators," he said. "Could there be a better argument to preserve the Senate's rules and customs and traditions?"

🚨 BREAKING: Chuck Schumer* speaks on the Senate floor in defense of the filibuster.

Biden, in a speech Tuesday in Atlanta promoting the voting rights bill, equated supporters of eliminating the filibuster to civil rights icons and cast opponents as racists and segregationists.

Senate Minority Leader Mitch McConnell called the speech a "rant" that was "incoherent," "incorrect," and "unbecoming of a president of the United States."

Republicans contend Biden's voting rights legislation is a political power grab that unconstitutionally federalize elections in favor of the Democrats.

Sen. Tim Daines said in an interview with Fox Business Network's "Mornings with Maria" that the legislation is "about ensuring the Democrats forever control Washington, D.C."

Daines called requiring voter ID, such as was done in his state, a "common-sense" voting reform.

The senator said 75% of the American people "support that kind of common-sense voting reform, making easier to vote and harder to cheat."

"The bottom line is this federal takeover of elections is about Stacey Abrams and Joe Biden, Nancy Pelosi, Chuck Schumer wanting to grab power," he said. "That is what this is about."

Alveda King, a niece of Martin Luther King Jr., said the speeches by Biden and Vice President Kamala Harris on Tuesday were an insult to all Americans, especially those in the African-American community.

"We were deeply involved in the wars that started and ended the Civil Rights movement in this country," she said in a statement. "The president and vice president’s misguided insistence on the ignorant, false claim that America is somehow stuck in the 1960s is disgusting, dangerous, and an affront to all the sacrifices and great successes this country’s brave Civil Rights pioneers made."

President Biden’s and Vice President Harris’s speech in Atlanta today was an insult to all Americans, especially those in the African American community.
—@AlvedaCKing @kenblackwell