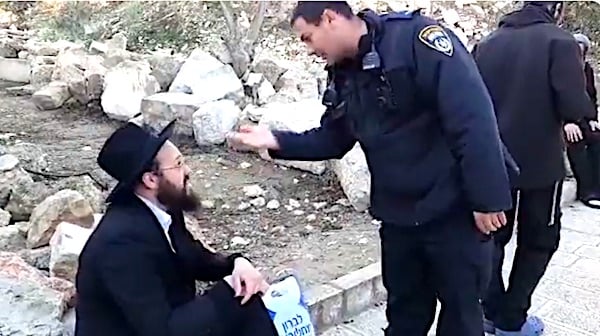 An Israeli Police officer asks a Jewish man not to bow his head on the Temple Mount in Jerusalem in January 2022. (Video screenshot)

(ISRAEL TODAY) -- Over the weekend a video clip of an Israel Police officer asking a Jewish man to stop bowing his head while atop Jerusalem’s Temple Mount sparked an angry online response.

In the brief clip, an ultra-Orthodox Jewish man is seen sitting beside a pathway on the Temple Mount, Judaism’s holiest site. He asked the officer if he is allowed to sit there, to which the answer is yes. The religious man then bows his head in apparent prayer, and the officer immediately reacts: “I am going to ask you not to bow your head.”

The man filming the scene is then heard saying, “On the Temple Mount it’s forbidden to bow your head.” At least if you’re a Jew.