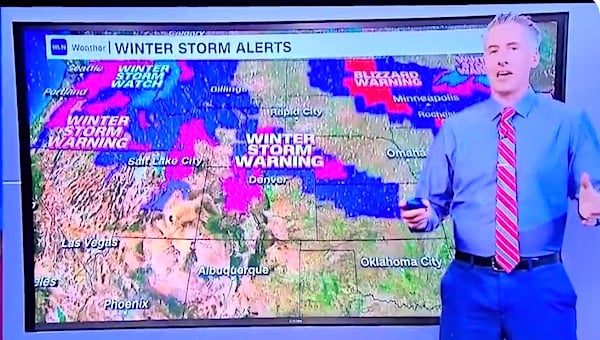 A weatherman for HLN lambasted Democratic Virginia Gov. Ralph Northam on air Wednesday morning for his comments on his state government’s response to heavy snowfall and massive traffic delays.

A snow-covered I-95 in Virginia left thousands of drivers stuck on the highway for several hours, with some trapped for more than a day. After HLN anchor Robin Meade said Northam insisted that his administration thought there would only be a few inches of snow, rather than a foot, meteorologist Bob Van Dillen called the governor out.

“Who’s the jackass that said that?” Van Dillen asked. “We had it pegged for like three days (in) advance. You knew it was going to be a lot of snow.”

“We were adding to it. Six to eight was the forecast, and they got about an extra four,” Van Dillen said. “Shut up, dude.”

The weather dept. @ #HLNTV is HOT 🔥 this morning.
Someone get Bob some ice 🧊. 🌊🏄‍♂️ #WinterStorm #I95 #snowstorm pic.twitter.com/i4ExolKpyR

The traffic problems began after a crash caused a buildup of cars. Democratic Virginia Sen. Tim Kaine remained trapped on the road for over 27 hours during the ordeal.

“I was trying to get up to D.C. for a voting rights meeting, I’m working on voting rights issues, and the meeting was at 8:00 and I wanted to do it in-person,” Kaine told CNN from Quantico, Virginia, more than two hours before he would arrive at the Capitol. “It’s turned into what will end up being a 27 or 28 hour ordeal, unlike anything I have ever seen.”

Northam defended his decision not to activate the Virginia National Gaurd or declare a state of emergency, citing the difficulty it would take to deploy workers and equipment on the icy roads.

“That p*sses me off, I got to just be honest with you,” Van Dillen said. “When people say that, ‘Oh, we didn’t know it was coming,’ yeah you did.”

Northam emphasized the ordeal was “an incredibly unusual event,” with Marcie Parker, a Virginia Department of Transportation engineer, saying the situation was simply too much to keep up with.

“Consequently, with the amount of traffic that we had on the interstate, the trucks and the cars couldn’t make it up and down the hills because we had too much snow and ice out there,” Parker said.