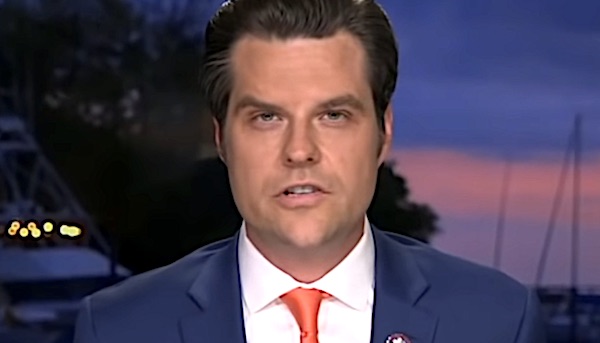 Few Republicans were around the Capitol on Thursday as the Democrat party staged its day-long requiem for the Jan. 6, 2021, riot there, giving speeches that blamed President Trump, holding moments of silence, several times, and even a "bipartisan prayer" vigil.

One who was around was Rep. Liz Cheney, R-Wyo., one of two Republicans who had opposed Trump enough to qualify her to be picked by House Speaker Nancy Pelosi for her partisan committee investigating the riot.

Two others were Reps. Marjorie Taylor Greene of Georgia and Matt Gaetz of Florida, each of whom has been known to unleash a comment or two on behalf of themselves and their party.

The Washington Examiner reported Thursday was no different.

Referring to the events about which the Democrats scheduled daylong memorials, Gaetz said, "It may very well have been a fedsurrection."

While the federal government repeatedly has declined to provide information about its informants, agents or spies that were on Capitol Hill that day last year, it is true that prosecutors have identified multiple "unindicted co-conspirators" who were alongside those who now are facing charges.

They apparently were doing the same things, but they are not being charged. Or even publicly identified.

And several investigative organizations have revealed that several of those on video while they were advocating for citizens to rush into the Capitol and take it over are not facing any accusations whatsoever.

It was reported only this week that Just the News noted that the question already has been raised in Congress, by Rep. Thomas Massie, R-Ky., who wondered, "How many January 6th protesters were actually working for the federal government."

Attorney General Merrick Garland can absolutely answer questions about whether Feds encouraged the January 6 crowd to breach the Capitol. pic.twitter.com/nSlD3qN7Rm

Massie's question came during a recent House Judiciary Committee hearing at which a video compilation showed Ray Epps, an apparent Trump supporter, telling people on both Jan. 5 and Jan. 6 to "go into the Capitol."

He's met with chants of "Fed! Fed! Fed!" as the crowd suspects he is a federal agent. And critically, he hasn't been charged with anything.

Just the News reported Massie asked Attorney General Merrick Garland during the committee hearing about the federal agents at the riot, and Garland declined to comment.

Significantly, WND reported when Revolver News tracked down Epps and released a report with evidence of proactive federal involvement in the events.

It also confirmed, in reporting backed by videos and images, there were others who worked in tandem with Epps, apparently to turn a peaceful rally into a riot.

Julie Kelly, who has done investigative reporting on the Jan. 6 defendants for American Greatness, is among many who have pointed out that despite the repeated claims that Jan. 6 was an "armed insurrection" of "white supremacists," not one person has been charged with carrying or using a firearm inside the Capitol building. The only person who used a firearm inside the Capitol, she noted, was the Capitol Police officer who shot and killed an unarmed female veteran, Ashley Babbitt.

And the FBI admitted it had not found evidence that Jan. 6 was the result of an organized plot to overturn the 2020 election, according to four current and former law enforcement officials.

When the Daily Mail tracked down Epps in Arizona at his Rocking R Farms, the report pointed out that Epps never entered the Capitol. But the video evidence confirms he urged people to do just that.

Revolver News further pointed out that Epps initially was on the FBI's Most Wanted list for the events that day, but then suddenly, and mysteriously, was taken off the list.

WND reported when a U.S. Army veteran who faces 15 years in prison for his alleged role in the Jan. 6 riot said in Carlson's "Patriot Purge" series an FBI informant he knew from his military service urged him to join the mob that broke into the U.S. Capitol.

Mark Ibrahim, a former Drug Enforcement Agency official, is accused by federal prosecutors of brandishing his duty weapon and badge to the Capitol grounds and climbing onto a monument to deliver a "monologue." He's been charged with making false statements to federal agents, entering restricted grounds with a firearm and injuring or climbing on a statue.

Also in Carlson's series, J. Michael Waller, a senior analyst for strategy at the Center for Security Policy who infiltrated Soviet front organizations during the Cold War, described the day as "a political warfare operation." He pointed to specific places where he saw "agent provocateurs" who attacked the Capitol with "a military-like precision," goading members of the crowd to cause trouble. One person who fits the description of a provocateur is John Sullivan, who, as WND reported, was in the Capitol on Jan. 6, at the scene of the shooting death of Air Force veteran Ashli Babbitt. Sullivan was seen in a video leading a rally August 2020 in Washington calling for "revolution." In a video by Sullivan showing him inside the Capitol, he can be heard declaring, "We did it!"

WND also reported that the federal government has cited in its prosecutions of Jan. 6 defendants other individuals doing the same things as the defendants.

Yet those other individuals haven't been charged.

Gaetz, on the issue of the government's involvement, said, "I do not believe that there would have been the same level of criminal activity on January 6th of last year, but for the involvement of the federal government."

And Greene suggested that if and when Republicans take back control of the House after the 2022 elections, they will relaunch investigations into the Jan. 6 events.

"Going forward with the Judiciary Committee, when Republicans take back the House, as we all are upset about any type of violence and riots in this country, we should have a January 6 committee that looks for the truth, instead of protecting its own and working on its own political goals," Greene said.

Videos of people inciting the crowd, and their subsequent lack of charges, does not prove government involvement, the two said.

"We did not want the Republican voice to go unheard, and we did not want today's historical narrative to be hijacked and captured by those who are the true insurrectionists," Gaetz said.