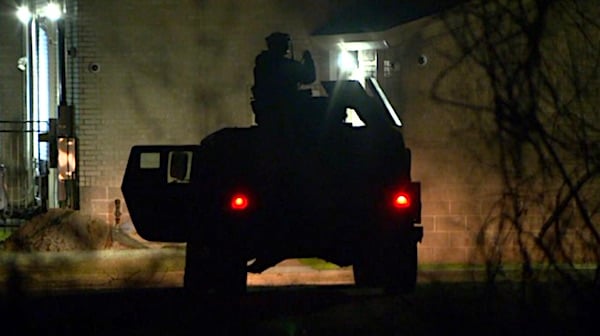 The scene of the hostage event in Colleyville, Texas, on Saturday, Jan. 15, 2022. (Video screenshot)

The FBI is being fiercely hammered for saying the Texas synagogue hostage taker's demands were "not specifically related to the Jewish community," with some calling for the complete elimination of the bureau.

"Any Republican Congress or Presidential candidate who doesn't loudly proclaim his intention to massively reform or disband this organization should not be considered."

The FBI is now an organization solely focused on destroying the domestic enemies of the Democratic Party.

Any Republican Congress or Presidential candidate who doesn’t loudly proclaim his intention to massively reform or disband this organization should not be considered. https://t.co/4CzguhpSJX

Kelly was responding to a news tweet by the Associated Press indicating "the Texas synagogue hostage taker's demands were specifically focused on issues not connected to the Jewish community."

At a news conference, FBI Special Agent in Charge Matt DeSarno said: "We do believe from our engaging with this subject that he was singularly focused on one issue, and it was not specifically related to the Jewish community. But we're continuing to work to find motive." 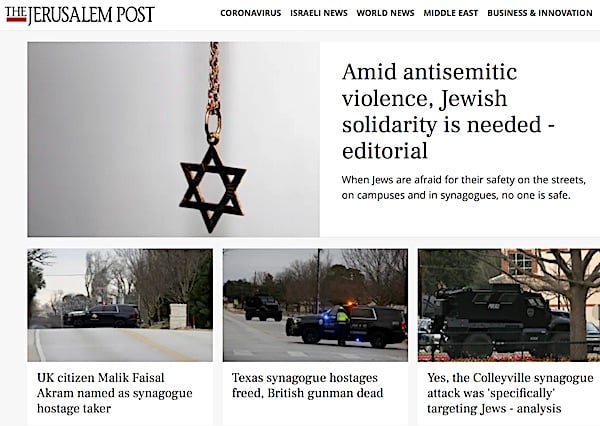 The front page of the Jerusalem Post online on Sunday, Jan. 16, 2022 indicates strong sentiment the hostage event in Collleyville, Texas, was directly aimed at Jews. (Screenshot)

In an analysis titled, "Yes, the Colleyville synagogue attack was 'specifically' targeting Jews," the Post reported:

The idea that any attack on a synagogue is "not specifically related to the Jewish community" is absurd enough.

Even with the broadest definition of who is considered Jewish, Jews make up only 2.4% of all American adults and only 0.6% of the population of Texas. It beggars belief, in most cases and in this one in particular, that someone outside the densest Jewish populations in America would have randomly stumbled upon a synagogue while looking for people to hold hostage.

Add to that the fact that the gunman entered Congregation Beth Israel on a Saturday morning, when Shabbat services are held. The timing was clearly intentional. ...

We don't know much about the hostage taker since the FBI is not releasing information. But we know that he targeted a synagogue to free a woman who did not hide her hatred of Jews. And we know a leading figure in the same organization that advocated Siddiqui's cause put synagogues and other major Jewish organizations on a list of "enemies" who spark Islamophobia.

These seem like directions of inquiry the FBI ought to be taking seriously.

The gunman allegedly demanded the release of a Pakistani woman currently behind bars in Texas on charges of trying to kill members of the U.S. military in Afghanistan.

According to Fox News, "The FBI and Justice Department previously described the woman, Aafia Siddiqui, as an 'al-Qaida operative and facilitator' at a May 2004 news conference. She is serving an 86-year prison sentence after being convicted in 2010 on charges that she sought to shoot U.S. military members while in Afghanistan two year earlier.

"She has a history of anti-Semitism, including demanding that jurors in her case be DNA tested and removed 'if they have a Zionist or Israeli background.'" 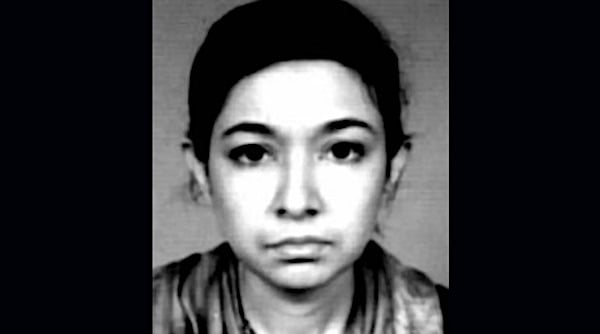 Undated FBI photo shows Aafia Siddiqui, who is serving an 86-year prison sentence after being convicted in 2010 on charges that she sought to shoot U.S. military members while in Afghanistan two year earlier.

Dr. Sebastian Gorka, host of "America First," tweeted: The FBI is a joke. A dangerous joke."

Others on Twitter ferociously pummeled the FBI, with comments including: