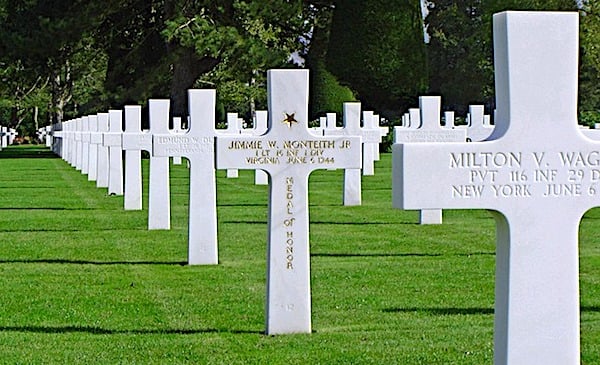 A fight has erupted in Switzerland after complaints surfaced from those of "other religious" that they were offended by Christian cross and other symbols of faith at a historic cemetery.

The issue was ridiculed by Robert Spencer of JihadWatch, who pointed out, "People of 'other religions' have been in Switzerland since time immemorial, with no problem. There has, however, recently been an influx of people who believe that the cross is an insult to the power of Allah (cf. Quran 4:171). Many of these people are intransigent to the point of violence. Are Swiss authorities trying to appease them?"

He explained the report of the conflict arrived via the Die Weltwoche publication.

Translated, that report explains how the dispute erupted in Riehen, the second largest town in northern Switzerland.

Foreigners there make up about 28% of the population. And Switzerland's largest cemetery is located there.

The crosses, for generations of Christians, have been a "sign of reconciliation, tolerance and love of one's neighbor," the report said.

"According to the administration of the central cemetery, more and more people of other faiths feel disturbed by crosses, Christian murals and even chapel names during funerals and ceremonies. The Catholic Church of Basel-Stadt is even showing itself to be compliant," Spencer explained the report said.

"The spokesperson for the church council told the newspaper Basler Zeitung: 'If there are people who consider Christian symbols disturbing in the process, it should be possible to cover them up or carry them out.'"

However, unlike in many other situations where Muslim demand that Christian symbols be removed or hidden, the Protestant Reformed of Basel is fighting back here, the report said.

Their church does not need any religious symbols, but a spokesman said, but, "Those to whom these symbols are important should be able to experience and see them."

The SVP party there also has launched a fight to preserve the cemetery culture, calling on parliament in a petition to prevent any changes.

The report explained, "In 2018, the newly elected Bavarian Prime Minister Markus Söder had a cross hung in his Munich state chancellery in one of his first official acts. Ten years earlier, when he was secretary-general of the Christian Social Union (CSU), Söder had made a mess of things with a single sentence: 'Crucifixes belong in classrooms, not headscarves.'"