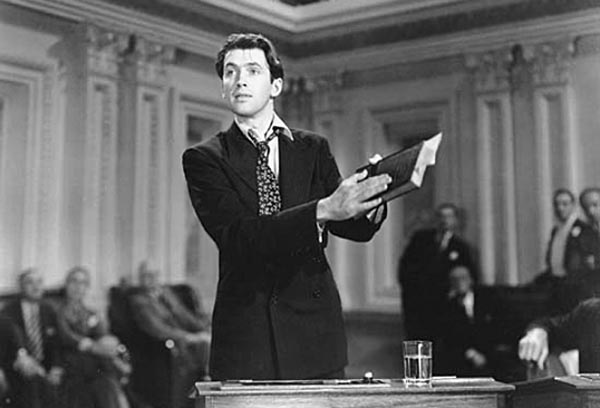 A still from the film, "Mr. Smith Goes to Washington," shows Jimmy Stewart during the famous filibuster scene.

In what may a sign of the doom of Joe Biden's presidential agenda, a new report reveals that two more Democrats have now indicated a wariness about his agenda to kill the Senate filibuster and adopt by a simple majority vote his planned takeover of all elections nationwide so they can be micromanaged based on the Democratic Party's interests.

It could also signal a looming failure of just about anything Biden proposes, as his failure to corral his own party members on one or two of the biggest points of his agenda would leave little likelihood they would fall into line on the lesser points.

The situation is that the Senate is divided 50-50 Republicans and Democrats. So the filibuster rule, which requires 60 votes to advance legislation, is blocking virtually every extreme agenda point Biden wants, from the elections takeover plan to his proposal to spend trillions on social and green agenda items.

Sens. Joe Manchin, D-W.Va., and Kyrsten Sinema, D-Ariz., already have staked out a position that destroying the filibuster rule to advance Biden's agenda on simple majority votes – Kamala Harris is the tiebreaker in 50-50 votes – isn’t acceptable.

Now Just the News reveals that, "Democratic Sens. Mark Kelly of Arizona and Jon Tester of Montana are reportedly hesitant to eliminate the legislative filibuster for issues like voting legislation."

It cited reporting from Politico that said Kelly is "undecided on reforming the filibuster while Tester is supportive of a 'talking filibuster' but hesitant to make a specific exception for voting rights bills."

Kelly commented, "I've never been part of an organization where it's really, really hard to do things. So if there’s a real proposal, I’ll take a look at it and evaluate it based on what’s in the best interests of the country."

Kelly explained to Just the News his evaluation will be based on what's best for Democrats, Republicans, Arizona and the country.

Both parties have used the filibuster over and over when they are in the minority and, in fact, Joe Biden and Sen. Chuck Schumer both have made statements that it is essential to the proper operation of the U.S. government.

However, flip-flopping on the dispute, Schumer said just days ago if the GOP doesn't vote the way he wants, he would proceed with a rule change vote to kill the filibuster and adopt his elections takeover strategy.

At a minimum, that would take every Democrat vote there is in the Senate, plus a tiebreaker from Harris.