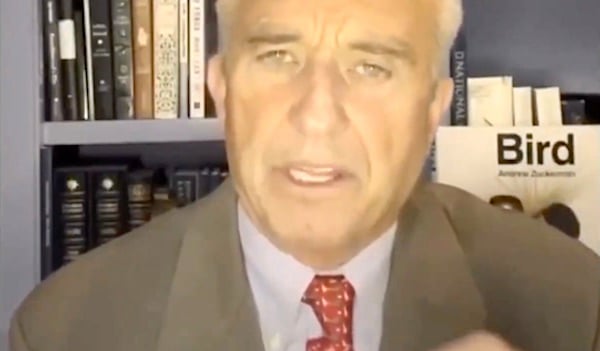 Robert F. Kennedy Jr., a lawyer, environmental activist and radio host, is warning America that as government demands more and more to cope with COVID-19, and citizens comply more and more, it's just going to get worse.

"Nobody has ever complied their way out of totalitarianism," he said in a recent video message.

The Gateway Pundit said Kennedy's New Year's statement was a call to action for 2022.

"I’m going to tell you these three things that you need to remember in this critical day and age," he said. "Once government acquires a power, it never lets it go voluntarily."

Also, he said, "Every power that government acquires, using this pandemic as a pretense, it will ultimately abuse to the maximum effect possible. This is a rule that is as certain as gravity," and "Nobody has ever complied their way out of totalitarianism. Every time you comply the demands will get greater and greater."

"We need to resolve here and now that this is the hill we need to die on. They have come for our jobs, they have come for our transport, now they’re coming for our children. We have an obligation as parents to protect them. There has never been a government in history that has told its people, we are going to demand children sacrifice themselves and take risks to save old people. It’s always the other way around. The old, the mature, the adults, always put themselves at risk to protect their children. This is an ethical issue. It’s a moral issue. It’s an issue of character for each of us. And it’s an issue about the preservation of democracy and public health," he said.

"We all need to stand up now and do everything we can to block these power plays by authoritarian powers within our society who are trying to steal from us the health of our children."

Kennedy, the son of former New York senator and U.S. attorney general Robert F. Kennedy and nephew of former President John F. Kennedy, in recent weeks and months has been one of the higher profile voices offering doubt – and open opposition – to Joe Biden's plans to vaccinate one and all – including children.

It's a natural escalation from his earlier opposition to vaccines that may – or may not – be linked to autism.

He's actively opposed the use of the preservative thimerosal in vaccines, contending it can damage children.