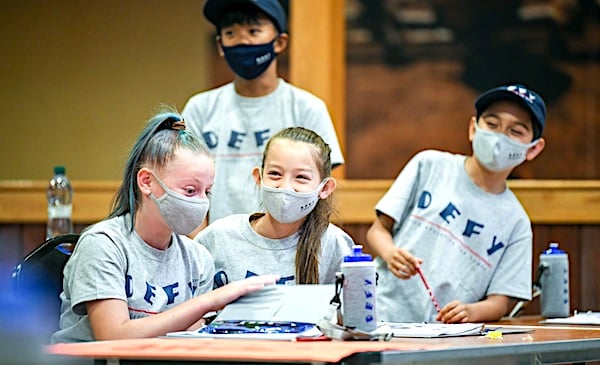 New York schools are continuing to enforce mask mandates despite a court ruling that such requirements are unconstitutional.

A New York judge ruled late Monday that Democratic Gov. Kathy Hochul’s order mandating masks in certain areas, including schools, was unconstitutional. However, immediately following the decision, the governor and the New York State Department of Health appealed the ruling, which state officials argued should result in an automatic stay, allowing the mask mandate to remain in effect.

“It is SED’s understanding that the Department of Health will appeal the Nassau County Supreme Court decision, which will result in an automatic stay that will unambiguously restore the mask rule until such time as an appellate court issues a further ruling,” the state education department told schools, according to an email obtained by CNN.

“Therefore, schools must continue to follow the mask rule,” the department said.

The department’s claims were disputed by several officials, including Republican New York Rep. Elise Stefanik, who said that there was no such stay and that masks are not mandatory.

“Kathy Hochul and her Far-Left Department of Education are lying to Superintendents causing unnecessary confusion. There is no stay on this court ruling,” Stefanik said in a statement shared with the Daily Caller News Foundation. “Kathy Hochul’s authoritarian mandate was deemed illegal by NY Supreme Court. Masks are not mandatory for students, period. Yet Kathy Hochul is still trying to force young children to wear a mask in school, shamefully disregarding the rule of law.”

Masks remain mandatory in several school districts across the state, while other districts have elected not to enforce the mandates following the ruling, according to ABC 7 News.

When reached for comment, the Department of Education told the DCNF that it was still “seeking confirmation” that the order is stayed. The department did not make a representative available for further questions.

“The Governor and State DOH have filed a Notice of Appeal and are seeking confirmation that the Court’s order is stayed,” New York State Department of Education spokeswoman Emily DeSantis told the DCNF. “While these legal steps occur, it is NYSED’s position that schools should continue to follow the mask rule.”

The New York State Department of Health did not immediately respond to the Daily Caller News Foundation’s request for comment.