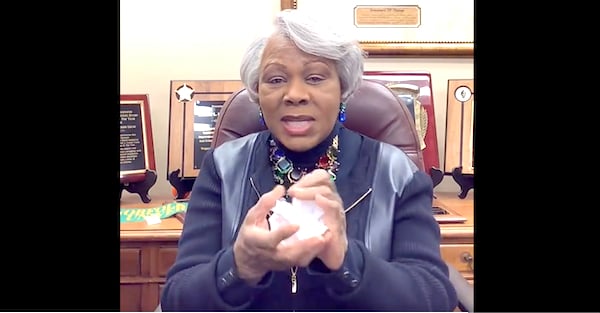 In a Twitter video, Virginia Democratic state Sen. Louise Lucas crumples a piece of paper to signify what Democrats intend to do with Republican bills (Video screenshot)

A bill in the Virginia state Senate that would have allowed health-care providers to prescribe ivermectin and hydroxychloroquine was blocked by Democrats after they shut down a public comment session and ordered state Capitol police officers to remove citizens from the chamber.

As the Democratic majority on the Senate Education and Health Committee moved to kill the Republican bill, Democratic committee Chairwoman Sen. Louise Lucas cut the remote audio feed of Charlottesville radio-show host Rob Schilling as he expressed support for the legislation, reported the National File.

Conservative radio host from Charlottesville is next and is cut off after voicing his support of the bill. This is I hope all of his radio broadcasts go, he is cut off and everyone applauds. pic.twitter.com/EPbO74Z74K

After the 9-6 party-line vote, Lucas banged her gavel and ordered police officers to remove the doctors, family members of COVID patients and others who came to speak in favor of the bill.

"Virginians are dying," a woman who was ordered to leave shouted.

Holding up a copy of Robert F. Kennedy Jr.'s book "The Real Anthony Fauci," she said of the the White House coronavirus adviser who has suppressed the use of ivermectin and hydroxychloroquine to treat COVID-19, "People across this nation are dying as a result of this man."

Another woman shouted, "Tyrants!" as she and others were kicked out.

Do most Democrats in office wish to prolong people's suffering in the coronavirus pandemic?
99% (1615 Votes)
1% (13 Votes)

The sponsor of the bill, Republican state Sen. Amanda Chase, told National File that Democrats "will legalize marijuana but prohibit the use of ivermectin and hydroxychloroquine for the treatment of COVID in a right to try state like Virginia."

The National File noted that after the vote, the committee chairman, Lucas, posted a video on Twitter in which she vowed to form a Democratic "brick wall" that will throw Republican bills in the trash. She illustrated her declaration by crumpling up a piece of paper and tossing it aside.

As President of the Virginia Senate I have a plan of what to do with any bills that would roll back our progress.

As a thank you for getting us to *27,000* engaged followers I want to share with you my plan- If you agree with the plan I need you to RT so we can save Virginia. pic.twitter.com/w7gRzk1PCa

One of the doctors who would have been immediately impacted by the legislation is Dr. Paul Marik of Eastern Virginia Medical School, who is suing a Norfolk hospital for banning him from prescribing ivermectin to his COVID-19 patients.

Supporters of Dr. Paul Marik greet him as he enters a Norfolk, Virginia, courthouse Nov. 18, 2021, to ask for an order allowing him to treat COVID-19 patients with ivermectin (Twitter video screenshot)

His lawsuit argues Virginia’s Advanced Directive statute gives hospitalized patients the right to choose what treatment they receive as long as a doctor determines it to be appropriate.

Marik told local WAVY-TV that the issue is bigger than one particular drug.

"This is not about ivermectin. This is about the bedside doctor being able to do what doctors have been doing for decades, and what doctors do across the world," he said. "Doctors decide what is the best treatment for their patients, and they alone are responsible for the patient and the treatment of the patient."

He said ivermectin is among other "safe off-label drugs that they are prohibiting me from using."

As WND reported, ivermectin is featured on the NIH website as a treatment for COVID-19 that is "under evaluation."

But many pharmacists and doctors, along with Marik, have disclosed that health-care management is barring them from prescribing ivermectin. And the drug was the target of a media and government disinformation campaign, dismissing it disingenuously as "horse dewormer." The FDA's official Twitter account posted a caption above a photo of a horse: "You are not a horse. You are not a cow. Seriously, y'all. Stop it."