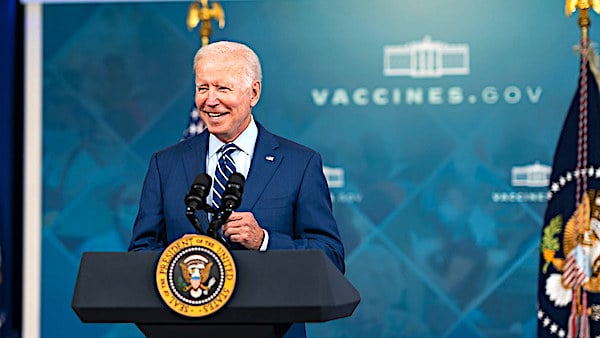 Two major Biden administration vaccine mandates that have been temporarily suspended in court will go before the U.S. Supreme Court in oral arguments Friday.

Biden announced in September his imposition of rules requiring private companies with 100 or more workers to be vaccinated for COVID-19 or regularly tested. And he mandated that all health care workers at facilities receiving Medicaid and Medicare funding receive the jabs.

The big issue is whether or not the federal government has the authority to force employers to require that their workers be vaccinated.

A legal group that has been at the forefront of helping employees navigate both company and government vaccine mandates believes the answer clearly is no.

"Joe Biden has no authority to issue unlawful shot mandates that are unconstitutional, abusive and inhumane against the people of the United States," said Liberty Counsel founder and chairman Mat Staver. "The Supreme Court must stop them once and for all."

The Biden administration is asking the high court to overrule lower courts that halted the private-employee policy in 25 states.

Biden's private employer mandate was issued Nov. 5 by the Occupational Safety and Health Administration. The rule punishes companies that don't comply fines of up to $13,600 per violation. And additional $13,600 fines could be assessed for each day that an employer does not stop the violation. OSHA also could fine businesses up to $136,000 for willful or serious violations.

The health-workers mandate was issued in November by the Centers for Medicare and Medicaid Services.

Liberty Counsel noted that since the 1970s, OHSA has issued nine Emergency Temporary Standards. Six were challenged, and of the six, five were struck down by the Courts of Appeal.

Last week, Biden was hit with criticism from both sides of the political spectrum for saying that there is no "federal solution" to the COVID-19 pandemic, only state solutions.

The president's critics point to the many instances in which he has vowed to "shut down the virus" and save the country from the pandemic.

On Tuesday, the Republican governors of Florida, South Dakota, Arizona and Texas called on Biden to follow up on his remark by abandoning his federal vaccine and mask mandates and other restrictions.

"Now that Biden has admitted to the nation that he has no plan to 'shut down the virus,' and that there is 'no federal solution,' we expect him to withdraw the unconstitutional and useless federal vaccine mandates," said a spokesman in the office of Florida Gov. Ron DeSantis.