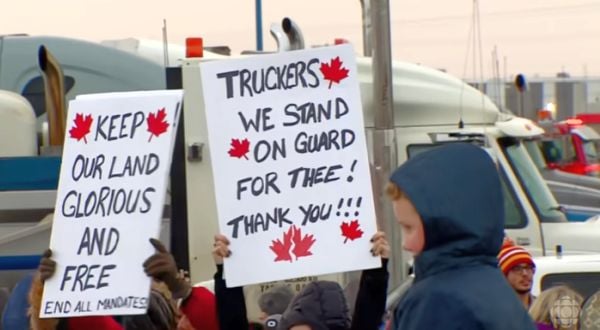 Truckers in Canada have assembled a convoy of their massive vehicles – leaving Vancouver and heading toward their government's seat, in Ottawa – to protest the nation's COVID-19 vaccination mandates.

And while government officials reject the statement being made as "fringe," supporters of the truckers say it's something else altogether.

Videos have started to appear:

50,000 trucks,joined by trucks from the US and 1.5 million people will demand an end to Covid discrimination and Trudeau’s tyrannical grip.

Canadian trucker part of the freedom convoy shares a video of supporters cheering them on in Langley, BC, Canada.

The truck convoy is making its way to Ottawa to partake in a protest next weekend against mandates. pic.twitter.com/O8ppz1ZB5T

And whether its hundreds – or thousands – of vehicles and people involved, it's certainly more than "fringe."

Fox News reported the protest could even set a record, as Benjamin Dichter, a spokesman for the Freedom Convoy 2022, told the Toronto Sun, the convoy is "70 kilometers long," or more than 40 miles.

"I have seen footage from an airplane. It’s impressive," he said.

The Canadian Trucking Alliance estimates that roughly 15% of truckers in the country are not fully vaccinated, or about 16,000 truck drivers.

The Sun estimated up to 50,000 trucks ultimately could be involved, but even without reaching that number, the message defies Prime Minister Justice Trudeau's claim that the protest is a "small fringe minority."

He called the views of the truckers "completely unacceptable."

Fox reported Canada's coronavirus mandates are among the most demanding around the world, with Ontario locked down just weeks ago, vaccinations are mandatory and authorities plan to punish people who are not vaccinated.

A report at Redstate.com said Trudeau's greatest claim to fame comes "from having dressed up in black face when he was a much younger waif who probably never thought anything like that would come back and bite him in his political arse. He survived that debacle during his last reelection in 2021, although a bit more embarrassed than damaged politically."

The report explained, "Truckers are the lifeblood of not only Canada but also of the United States. They are making a statement that if they were ok to deliver all the goods we needed during the spring of 2020 and all of 2021 with no poke mandate to cross the border, there is no proof that says it is unsafe to do so now."

And the report noted, "Unlike most groups that have opposed government overreach, the truckers of Canada are in a unique position to have a massive impact. If those rigs that are usually crossing the Canada-U.S. border all of a sudden are sidelined sitting in Ottawa or just staying home, Canada AND the United States have a BIG problem. Grocery store shelves and many others will start to go sparse or bare."

The report said, "The truckers are heading to Ottawa to peacefully protest the vaccine mandates."

It continued, explaining there are "thousands of people standing on the side of the road in the DEAD of winter in Canada cheering these trucks on. Thousands of Canadian patriots have offered food and water to help the truckers as they drive to the capital city. This is not a fringe minority, prime minister. These are your citizens demanding that you listen to common sense and not pseudo-science taking on the form of repressive mandates."