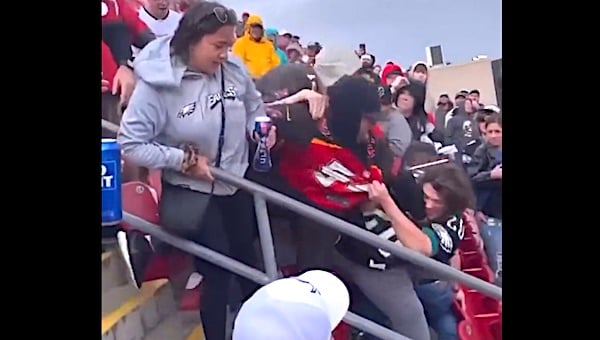 Sunday's NFL matchup between the Tampa Bay Buccaneers and the Philadelphia Eagles got dangerously ugly as a fight among fans resulted in at least one person being violently thrown down the stadium stairs.

The brutality took place at Raymond James Stadium in Tampa, Florida, with some shoving beginning as Philadelphia was behind 31-0.

Someone sporting a Fletcher Cox Eagles jersey is seen throttling a Bucs fan, sparking the pandemonium.

Another fan wearing a Brian Dawkins Eagles jersey grabbed hold of a Tampa Bay fan and viciously tossed the man down the stairs.

Bucs fans then pummeled that Eagles fan incessantly, as one woman yelled, "Somebody call the police!"

Just last week, another Eagles fan was knocked out during Philadelphia's home game against the Dallas Cowboys.

Earlier in the season, two Eagles fans were snagged for allegedly having sex in the restroom at Bank of America Stadium in North Carolina.