The Obama administration targeted sole proprietors and small businesses in the real estate industry after the crash of 2008, while letting the big banks off the hook with bailouts. One of most horrific cases involved Republican real estate broker Tony Viola, who served nine and a half years in prison as a juicy target of Ohio Democratic prosecutor Dan Kasaris. Viola was convicted of supposedly tricking banks into offering mortgages with no money down. But in reality, the banks were knowingly offering those loans – evidence the prosecution withheld from him.

Viola only got out of prison due to an employee of the prosecution, Dawn Pasela, becoming so disgusted with the suppression of evidence showing the banks weren't tricked and other corruption such as missing computers full of evidence that she changed sides, helping Viola conduct a successful appeal pro se from prison.

But nothing happened to Kasaris or the federal prosecutor involved, Mark Bennett. Pasela's parents, Edward and Karen Pasela, who have remained fairly quiet until now, are so outraged that they participated in a press conference with investigative journalist Brian Douglas last month exposing what happened in Viola's case and how bad corruption is in the Ohio criminal justice system.

Douglas put together Viola's story in a two-part series, which included former colleagues of Viola's testifying to his impeccable character. For his efforts, Douglas was threatened with a lawsuit by Kasaris' attorney, which Douglas included in his investigation so people are aware of the intimidation. Douglas has been forced to hire his own attorney.

Pasela was threatened by several FBI agents with prosecution if she did not leave the state and avoid testifying. They said they would bring charges against her for violating an NDA — but she never signed an NDA.

Pasela was found dead the day she was supposed to testify in court in Viola's defense for the first time, and it was blown off as alcohol poisoning with no real investigation. The parents of Pasela want a full investigation into their daughter's death. 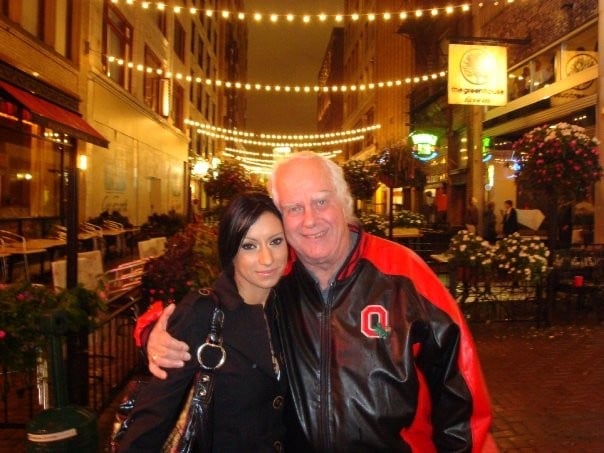 Dawn Pasela and her father before her death.

Kelly Patrick, who was married to John Patrick, the brother of Kasaris, revealed how she discovered that Kasaris intervened as county prosecutor to prevent his brother from being prosecuted for domestic violence against her and for a marijuana-growing operation. She also has evidence that Kasaris was having a long-term extramarital affair with the prosecution's key witness, Kathryn Clover, documented by over 100 pages of Facebook messages with his wife, Susan. Federal prosecutor Bennett admitted that Clover, who was a paralegal for the prosecution, was not really much of a fact witness as she was portrayed, had committed perjury but would not let her recant her testimony on the witness stand, even though she wanted to.

Elsebeth Baumgartner also spent several years in prison due to legal corruption in Ohio. She discovered $1.4 million being misspent related to schools and, as a lawyer, initiated federal racketeering lawsuits against those responsible. Kasaris got her indicted for intimidating a judge with the lawsuits – even though no federal judge ever ruled that her lawsuits were without merit.

She believes she was targeted because she ran a blog exposing all the corruption. She said the corruption and cover-ups are so bad she's been unable to get any justice: "There is no place to go to bring public corruption charges against a public official."

Brenda Bickerstaff, a private investigator, explained how as part of her job she tried to talk to a witness in a high-profile case, and Kasaris threatened to have her indicted if she did.

Bob Grunstein, who wrote "Bad Minds, High Places" about how powerful people in the criminal justice system in Ohio misused the system to attack him after he dared to criticize an Ohio judge, relayed how common the corruption in Viola's case is. He said the problem is the corrupt are untouchable.

Noted Grunstein: "Any new rules and laws don't matter since they won't follow them, and no one will hold them accountable. No one will come forward because they're terrified of what they'll do to them. The federal courts protect their friends in the lower courts, because that's where they came from."

Viola said his case comes down to four key facts: First, the prosecution has never turned over the $20 million it collected as "restitution" to the "victims," big banks. Instead, it's been used as sort of a "slush fund" for prosecutors, buying laptops, hotel rooms, etc. Viola calls it money laundering. Second, the FBI admitted it did not know about 10,000 documents in its possession – many that exonerated him – for 10 years.

Third, the judge in his case, Federal District Court Judge Donald Nugent, sealed the records regarding Clover so Viola and others cannot use the evidence of her role to expose prosecutorial corruption in his case and others. And fourth, Kasaris used a Yahoo email account with his official signature on it to conduct official business, using it as a back-channel way to communicate with criminal defense lawyers.

Mariah Crenshaw of the criminal justice reform organization Chasing Justice said the laws can be changed to stop this kind of abuse. She is proposing legislation that will allow prosecutors to be charged with criminal negligence for withholding potentially exculpatory evidence, and wants to allow defense attorneys to present their side to grand juries instead of leaving it exclusively to prosecutors.

Viola wants Ohio Attorney General Dave Yost to suspend Kasaris and conduct a full investigation into his wrongful prosecution, as well as a DOJ investigation of Bennett. U.S. Sen. Sherrod Brown, D-Ohio, asked the FBI in November to enlist the inspector general to investigate the FBI's actions in Viola's case, but so far there has been no response.

Maybe Viola will finally get somewhere because he's gotten such a broad spectrum of people interested in his case. Even Black Lives Matters is involved. When you have people all across the political spectrum expressing outcry over a criminal case, perhaps the corrupt players responsible for putting an innocent man in prison will finally be investigated – and exonerate over a thousand others in the real estate industry who were likely also wrongly prosecuted.

Rachel Alexander
Rachel Alexander is a senior editor at The Stream. She is a political columnist and the founder and editor of Intellectual Conservative. Alexander is a regular contributor to Townhall and The Christian Post. She was ranked by Right Wing News as one of the 50 Best Conservative Columnists from 2011-2017 and is a recipient of Americans for Prosperity's RightOnline Activist of the Year award.
Neuroscience: Democrats think more with their emotions
Should we engage with trolls on social media?
'Christian nationalism': Biblically justified, or racist?
With Biden's dark speech, has the left gone too far?
New documentary reveals likely voting-machine tampering
See more...