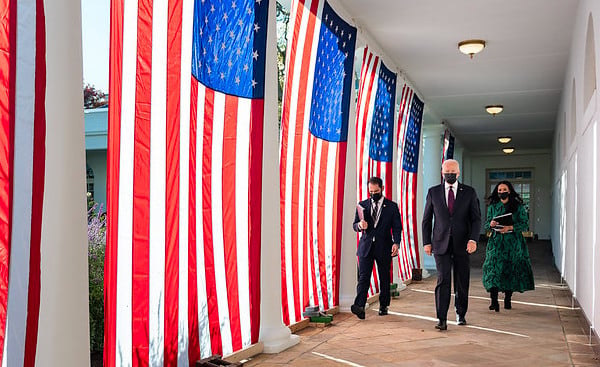 A vast majority of Americans not only know about Canadian Prime Minister Justin Trudeau's emergency declaration, where he essentially assumed the powers of a monarch and began issuing orders that cut into rights of free speech, free expression, free association and more, they oppose it.

Could never happen in the United States, right?

Well, two members of Congress, one on the Senate and one in the House, are pointing out that when extremists are in power, they do, well, the extreme.

First, a report at Star News Network pointed out that just days ago, Joe Biden extended a declaration of a national COVID emergency.

Even though COVID vaccination numbers are high, case reports are plunging and even Democrat governors are dropping their mask demands – in light of the overwhelming public opposition and a recognition that the 2022 midterms are only months away.

The report explained Biden sent a letter to congressional leaders claiming, "There remains a need to continue this national emergency."

He claimed, "The COVID-19 pandemic continues to cause significant risk to the public health and safety of the nation. More than 900,000 people in this nation have perished from the disease, and it is essential to continue to combat and respond to COVID-19 with the full capacity and capability of the federal government."

Most of those deaths have been on Biden's watch.

He cited the National Emergencies Act in explaining he sent to the Federal Register for publication a notice about the "emergency" continuing past March 1, 2022.

Rep. Ronnie Jackson, who has served several presidents as White House physician, said on social media the problem is that Biden "can't give up his authoritarian chokehold on your life. He needs an excuse for unsolicited mail in ballots for upcoming midterm elections to justify his reckless and irresponsible spending of your children's and grandchildren's future…"

It is fact that multiple states ignored their own rules and laws during the 2020 election to "accommodate" the pandemic during an election, triggering investigations and claims that those rules were biased to help Biden's election campaign.

Multiple states now have taken action to prevent that in the future, but if Biden could extend the COVID declarations into the fall, there undoubtedly would be a recurrence of the issue.

Biden can’t give up his authoritarian chokehold on your life. He needs an excuse for unsolicited mail in ballots for upcoming midterm elections to justify his reckless and irresponsible spending of your children's and grandchildren's future. Criminal!! https://t.co/hYV25gxE8W

The extension was done in the face of a plan proposed in Congress to end the emergency.

U.S. Sen. Roger Marshall, R-Kan., has proposed a bill to revoke many of the federal government’s extended powers regarding the pandemic.

Marshall told Fox News Digital, "With COVID cases and hospitalizations on the decline, 94 percent of Americans having immunity to COVID, mask mandates falling by the wayside, and 70 percent of Americans agreeing ‘it’s time we accept that COVID is here to stay’ and that ‘we just need to get on with our lives,’ it’s clear we need a new approach to COVID as we learn to live with it."

He said the beginning of that effort is to end the "state of emergency."

It was Sen. Rand Paul, R-Ky., who warned of a possible second blow to fall.

When Canada became Egypt . . . ruled by emergency edict that allows prohibition of public assembly, travel, and the commandeering of private companies without your day in court.https://t.co/wvX2BydS4x

In a report at Summit News, he said the emergency "powers" being tossed about by Trudeau also could bite the United States.

The report explained, "Appearing on the BASED Politics podcast, Paul described the statute being used by the Canadian Prime Minister as 'very, very dangerous,' noting 'We have the same sort of statutes here, and I have long-time been an opponent of these.'"

He said, "We actually have in the United States an Emergency Act that allows the president to shut down the internet."

He called for changes to the law.

"There are some emergencies in the U.S. that have been going on for many, many decades. And the president can just renew them every year. There’s no real stopping him," he said. "And so the emergency edict that Trudeau has done in Canada allows him to do some horrendous things, allows him to stop travel, allows him to detain people without trial. Now we don’t know that he’s going to do that, but it is very, very worrisome what he might do."