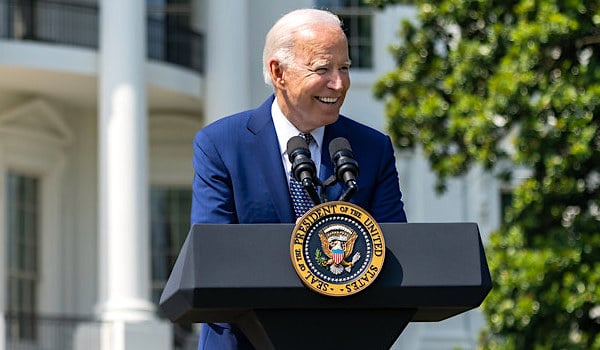 A new report this week told of producer prices skyrocketing by "a staggering" 9.7% for the 12 months ending January, which means inflation was "near the highest pace on record."

But consumers know, if they are buying food, fuel and housing, that that doesn't describe the catastrophe adequately.

The Washington Examiner quoted statistics on producer costs from the Bureau of Labor Statistics, which came just days after the same feds reported consumer prices for January were up by 7.5%, the "fastest annual rate in four decades."

It's just one of the calamities facing Joe Biden as his party faces the possibility of a blowout in the midterm elections in a few months, where the party out of the White House most often gains a good number of House seats.

The PPI looks at the prices of goods at the wholesale level, which is a significant factor in the prices consumers end up paying.

"Over the past month, producer prices have increased by 1%, double the consensus expectations of a 0.5% jump," the report said.

"Factories are producing more inflation than goods at this point, and with supply and labor shortages not going away, inflation is going to stay on the front burner of Federal Reserve officials’ concerns for now," FWDBONDS Chief Economist Christopher Rupkey told the Examiner. "Inflation shows no sign of stopping with today’s 1% print."

Biden – and many other Democrats – have repeatedly promised over the last year, when inflation started appearing and now has surged, that it will be both minor and transitory, prompting critics to ask Biden to define exactly what he means by "transitory."

The Federal Reserve has been implementing unprecedented measures, such as zero interest rates and massive government bond purchases, to hold the line against COVID-19 for the last two years.

The Examiner explained, "Now, the Fed is trying to catch up with the inflation readings by reversing the easy-money policies. Some Fed watchers are predicting a half-percentage-point rate hike at the monetary policy committee's March meeting rather than the typical quarter-percentage-point raise, which would essentially be the implementation of two rate hikes at once. It would be the first time the Fed has taken such an extreme move in more than two decades."

The Examiner report, however, charged, "Even with the impending rate hike, no matter how aggressive, it will still take months for inflation to tamp down to a level digestible to average people who have watched their grocery and energy bills increase."

Inflation is just one of multiple crises facing Biden, who created a disaster on the southern border by canceling President Trump's multiple security programs, saw his congressional agenda fail, COVID remain out of control, and the Afghanistan withdrawal rebound against him.

WND reported a month ago when the Consumer Price Index was at 7% that families buying beef for a family event were having to pay $60 instead of $50, and a tankful of gasoline was costing $60 instead of $40.

US #inflation rises to 7% in December, highest level in 39 years.

The CPI excludes food and energy costs, so the real impact on consumers isn't reported in only that number.

Biden recently singled out a minor reduction in gas prices, of 2.2% in December, but ignored that they remained "50% higher than a year ago." And food prices actually were up in December, "making it unclear what falling food prices Biden was referring to."

The Daily Caller News Foundation reported the GOP was placing the blame directly on the Biden administration.

"Here we are with another month of record-high inflation,” Ranking Member of the House Committee on Economic Disparity Bryan Steil told the Daily Caller News Foundation.

“When will the Democrats and the Biden Administration stop ignoring the crisis and work to bring costs down for American Families?” Steil said. “Workers should not have to become accustomed to losing more of their paycheck every single month.”

Families, because of the inflation Biden has allowed, are paying thousands of dollars a year more for the same food, fuel and other services and products than they did a year ago.