To those who follow the news, it has become increasingly clear that Russia doesn't want Ukraine in NATO. Fair enough. It's also clear that NATO doesn't want Ukraine in NATO. I mean, it's a failed state. All things being equal, we'd prefer that Ukraine weren't even in Europe. So, given that Russia and the West are in rare agreement, why not … go to war over it anyway? Brilliant! And, with visionary leaders like Joe Biden at the helm, what's to stop us? Full steam ahead!

In case you couldn't decipher my sarcasm, let me be more upfront: there is no good reason for the current brouhaha between NATO and Russia over Ukraine. Ukraine has been, for a millennium or so, deep inside the Russian sphere of influence. In effect, Ukraine is Russia's little brother – headstrong and resentful, but destined to live in the shadow of big, strong Rus, come what may. And we in the West, for some reason, think it's our business to take Ukraine's side (of late), and to upbraid Rus for his highhandedness, insisting that he treat his little brother like an equal. What's more, we expect to get our way not by bopping Rus on the nose, in the time-honored manner in which bullies are generally brought to heel, but by waving our arms in a pantomime of outrage and, if pressed, by threatening Rus with a cut in his allowance. Little do we realize that such tactics are tailor-made to infuriate Rus, to goad him to acts of aggression, and in fact to make little Ukraine's already complicated life absolutely miserable. The simple fact is that we interfere with this age-old fraternal bond at our peril, and even more so at the peril of the very people we claim to want to help.

Arguably, our useless chiding of Russia and our even more useless cheerleading for Ukraine might be defensible, if Ukraine itself were worth fighting over. It isn't. It probably never was, and it certainly hasn't been since we and the Europeans acquired the ability to produce more food for ourselves than we could possibly eat.

Once upon a time, Ukraine was a breadbasket, and rich agricultural lands are worth a pitched battle or two. Now, though, Ukraine is an impoverished backwater, a cesspool of corruption and strategic dead weight. Winning its allegiance, or defending its independence, is about as useful to the West as staking a claim to one of Jupiter's moons, or annexing broad swathes of the fourth dimension. Ukraine ought to be absolutely, positively unthinkable as the ground over which World War III could be fought, with all the dreadful portents for nuclear annihilation such a war would bring with it.

Think about it: the West and Russia, despite some close calls, have successfully avoided major wars for 75 years. That's three whole generations! And now we're contemplating throwing away that legacy of peace and prosperity for … the sacred sovereignty of Ukraine? No! A thousand times, no! The very prospect should send chills down our collective and individual spines.

Better than all the blustering that's characterized our approach to Ukraine thus far would be some genuine dialogue and a little common sense. Russia is contemplating an invasion of Ukraine for one reason and one reason only: because the West has pushed the boundaries of a hostile alliance, NATO, closer and closer to Russia's historic and strategic heartland, ever since the fall of the Soviet Union in 1991. Moreover, we show every sign of nibbling away further at Russia's "near abroad" until, having secured all of it for ourselves, we can start destabilizing Russia herself, encouraging her people to turn against their leaders and thus make our conquest of our ancient enemy complete. Why else would we have maintained the NATO alliance in the first place, once the Cold War was won, and why would we have made its relentless eastward expansion its principal mission?

We can, however, diffuse Russia's anxiety and forestall a seemingly imminent invasion by a simple expedient: We make Russia a promise, either explicit or implicit, that Ukraine will never be a candidate for NATO membership – and, in fact, that the era of NATO expansion has come to an end. By doing so, we would not only bring the present crisis to a happy conclusion, thus securing peace and prosperity for ourselves and for the Russian people, but we would also have conveyed these inestimable blessings to Ukraine. The Ukrainians' sovereignty would be intact (if a little frayed around the edges), and all for the sacrifice of one absurd fantasy: that Ukraine could ever be a member-in-good-standing of the Western alliance. We, the Ukrainians and the Russians will all be better off when this dangerous illusion is set aside.

"President" Biden, I realize that, as a loyal CNN/MSNBC viewer, disparaging and antagonizing Russia comes second nature to you, but, please, give up these strong-arm tactics before you get someone hurt – and, by "someone," I mean everyone!

Nicholas L. Waddy
Dr. Nicholas L. Waddy is an Associate Professor of History at SUNY Alfred and blogs at: www.waddyisright.com. He appears on the Newsmaker Show on WLEA 1480/106.9.
How the Cold War's end precipitated the ruin of the West
Is the end nigh for Republicans?
Will Biden and the Democrats obey the Supreme Court
'Ultra MAGA'? Is that the best you can do, Joe?
The (re)popularization of discrimination must end
See more... 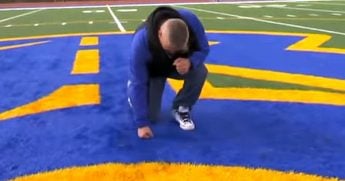