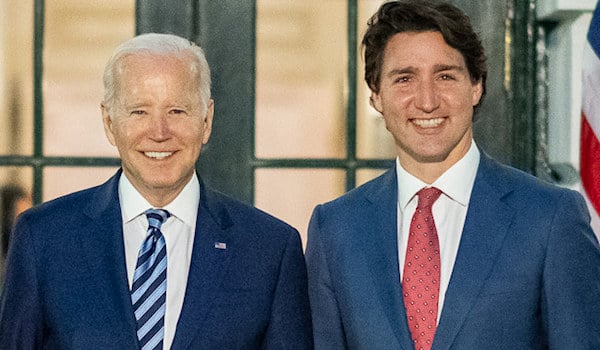 Dozens of members of the Canadian clergy have written an open letter to Justin Trudeau and other government officials charging them with ignoring, brushing aside, and even insulting the nation's residents as they have protested, "using every lawful means at our disposal," the loss of rights under the government's COVID agenda.

The letter appeared online at Liberty Coalition Canada, a group that works to oppose the "breakdown of liberty" in the nation, educating citizens on human and constitutional rights.

The ministers said they are writing as representatives of those in the nation who are "law-abiding citizens who respect the God-defined role of civil government and uphold the Canadian Charter of Rights and Freedoms, the highest law of our land, which recognizes the supremacy of God over all human legislation."

The ministers explain they've worked for two years, "respectfully and peaceably," to express their concern over the government's "indefinite suspension of civil liberties, coercive mandates and perpetual state interference in the life, freedom and worship of the church – freedoms guaranteed by both our inherited Common Law tradition and Charter."

"We have used every lawful means at our disposal to be heard and taken seriously. Yet at every turn, we have been largely ignored, brushed aside, insulted and even told we in no way represent Canadians," they said.

Now, they point out, there it the "hugely popular truckers convoy containing many Christians (including pastors)" that captured the imagination of Canadians, as well as others around the world.

"The Ottawa protest has presented your government with a wonderful opportunity to meet with and speak to ordinary Canadians lawfully and peaceably requiring the restoration of their constitutional rights. However, in response to their singing, praying, dancing, candy floss, bouncy castles, speeches about the constitution and outpourings of patriotic love for the country, your government has not only refused to meet with these citizens to hear their concerns, you have insulted, denigrated and lied about them, further dividing a hurting and broken nation," they warned.

Then they got specific: "As ambassadors of Christ, whilst we respect your office as a public servant and honor the limited role of civil authority as a ministry of public justice, we do not hesitate to fulfill our responsibility as servants of the living God by unapologetically reminding you that Jesus Christ is Lord and King and the ruler of the kings of the earth. He sets up kings and pulls down the mighty from their thrones and none can stay his hand."

They noted their own nation's Coat of Arms states: "Now therefore, be wise, O kings; Be instructed, you judges of the earth. Serve the Lord with fear and rejoice with trembling. Kiss the Son, lest He be angry, and you perish in the way, When His wrath is kindled but a little. Blessed are all those who put their trust in Him. (Ps. 2: 10-12)"

The problem, they explain, rests with Trudeau, whose government this weekend arrested hundreds to try to break up a protest in Ottawa.

"You are neither the king nor the ruler of Canada. Both you and your colleagues are public servants sent for a short time to Parliament at our behest as citizens to govern under God in terms of the Canadian Charter and to seek a harmony of public legal interest. You do not grant people rights and responsibilities that are theirs as God’s image-bearers and a free people. Since you do not grant them, you have no authority to remove them."

They continue, "Your government does not grant people the right to their bodily integrity, the right to work or earn a living, the right to decide for their children or to be with their families or dying loved ones, the right to gather to worship and obey God, the right to travel in their own land or enter and leave. Civil government exists to protect these pre-political and fundamental freedoms, not bestow and remove them as if it can function in the place of God."

Therefor, they wrote, they condemn "in the strongest possible terms" Trudeau's decision essentially to declare martial law under the Emergency Powers Act (1988) with the "intent of bringing unaccountable state power to bear on peaceful citizens – 'men women and children' – who have been stripped of their fundamental freedoms for two years and who have in many cases lost everything as a result of your government's mandates."

In fact, his actions "are exposing this government and people to the judgment of God, and we are deeply concerned that you do not appreciate the significance of God’s wrath upon a rebellious and lawless nation."

He should, in fact, they told him, "step back from the brink."

A political blog posting said, "Will this be enough to bring the government back to its senses? Or will they continue to be a historical lesson to other countries moving forward?"