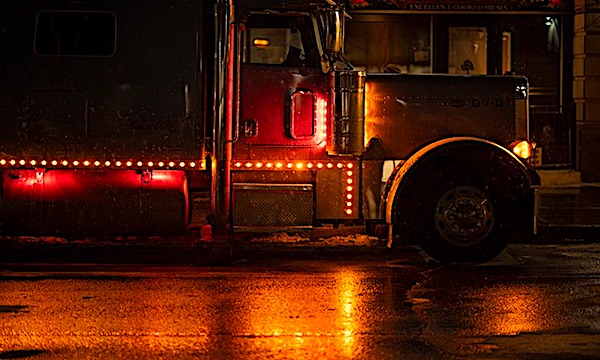 The truckers' convoy protesting COVID mandates across Canada has proven to be at least partly successful, as provinces are starting to relinquish their mandatory mask and vaccine demands, even as the action has enraged politicians and triggered a national emergency declaration.

Now the same movement is coming to the United States.

It was feared by Joe Biden's Department of Homeland Security to already be a threat, because the federal agency warned of the possibility of the disruption of traffic at last weekend's professional football championship in California.

But now a report in Newsweek has cited a email from organizers in revealing that the "MAGA Convoy," so named after former President Donald Trump's campaign slogan, "Make America Great Again," is to start engines in Los Angeles on Feb. 25, and head toward Washington, D.C.

"Many" stops are planned, the email said.

"Okay it's our turn! The Canadians did a great job, but we're going to boost the Freedom Convoy and include a MAGA Convoy too!," the report quoted from an email.

Donations are being accepted online, to pay for the drivers, support staff and fuel.

The Canadian protest started with a group of truckers in western Canada who decided to fight Justin Trudeau's limits and mandates. The trigger was a demand for truckers to be vaccinated to cross the U.S.-Canada border.

They arrived in Ottawa, the capitol, two weeks ago, and since they have been targeted by government action up to and including arrests and confiscation of trucks.

The movement actually already has reached the U.S., with a short-term protest that happened recently among truckers in Alaska. And Yourerie.com reported that there was a "big show of support" for members of the U.S. Freedom Convoy who made a stop in Erie last weekend.

It was in support of the Canadian truckers, and participants arrived at the Pilot Travel Center on Perry Highway.

"Everybody is encouraged and we feel hope for once. We feel in two years that maybe this will end things, maybe this will be a new beginning. Maybe we cannot be divided any longer,” said Jennifer Weiczorek.

That group began in Tennessee and made several stops en route to Buffalo.

Yahoo reported there were multiple moves to create a U.S. convoy.

One effort, the report said, was being assembled by Dr. Aaron Kheriaty, who was fired from a teaching position at UC-Irvine for refusing to get vaccinated.

He was calling his effort the "People's Convoy."

The report cited "at least" three national convoys being organized in the U.S., plus several smaller, regional events.