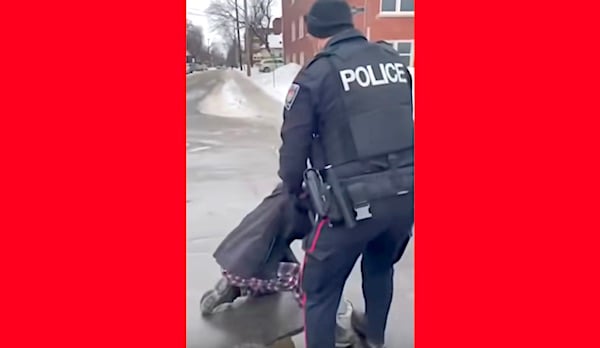 A video of a 78-year-old man being taken down and arrested by police in Ottawa, Canada, for the offense of honking in support of a truckers convoy opposing the nation's COVID mandates has this week obliterated all else in the dispute.

The case developed when police stopped Gerry Charlebois only a few blocks from the massive truckers' protest of COVID-19 restrictions the federal government in Canada has applied to residents.

He honked at a trucker and gave him a thumbs-up.

However, that violated a brand new order from a judge, Hugh McLean, of Ontario Superior Court, who ruled that no one could use "air horns or train horns" in that area of Ottawa, except for those on fire trucks, for 10 days.

The offense also requires that the person know about the order and it doesn't actually mention ordinary electronic car horns.

However, those details weren't an issue when two police officers arrested the great-grandfather, who at 4-foot-10 was hardly a presence in the disagreement.

Watch the video, but be aware of foul language throughout, mostly from bystanders.

The Gateway Pundit commented that the arresting officer, identified only as Jones, insisted that honking a horn "is an offense."

The old man sustained bruises and cuts on his arms and hands, shoulder, and knee.

The officer said he had it "written down" that honking a car horn was an "offense."

Charlebois told the Toronto Sun he meant no trouble, he just wanted to give a trucker "a thumbs up and a honk."

Truckers for several weeks already have been protesting in Canada over that nation's extreme COVID mandates. The movement already has spread to several other nations, even as Prime Minister Justin Trudeau continues to consider them "fringe."

Charlebois eventually was given a $118 ticket for "unnecessary noise."

The Ottawa Citizen noted the judge found people "have a right to protest various things," but said the noise could cause irreparable damage.

"Tooting a horn is not an expression of any great thought," the judge claimed. And he said the public already is fully aware of the protest, so there's no need to do something to bring it to their attention.

The noise ruling came in a case brought on behalf of a resident, Zexi Li, 21, who reportedly measured the noise in her apartment at 80 decibels.

A lawyer from the Justice Center for Constitutional Freedom, Keith Wilson, represented several trucker defendants and said the protest was a matter of free expression, and his clients weren't necessarily involved in any noise.

He called it a "spontaneous grassroots phenomena that started in Canada and is now spreading around the world in response to what we’ve all had to endure for the last two years. It’s an effort to end that harm and that hardship."

The Toronto Sun reported Charlebois' son was horrified by what happened to his father.

The Washington Examiner pointed out that several people were arrested in recent days because of the protest.

And police issued more than 500 tickets as the "Freedom Convoy" continued. Officers already have been arresting anyone bringing fuel to the truckers.

The Examiner explained, "The protests began after a group of Canadian truckers and their supporters drove from Western Canada to Ottawa to challenge a regulation that requires truckers returning from the United States to show proof of vaccination. If the truckers are not fully vaccinated, they will be subjected to COVID-19 testing and quarantine requirements. There are similar requirements on the U.S. side of the border."

The protests now have grown to encompass a wide variety of anti-freedom mandates by government.

Trudeau recently said, to parliament, "I know people are tired, but we’ve seen it through the various [COVID-19] waves and their receding over the past months [that] these pandemic restrictions are not forever, but we have to make sure that our shared values and the idea of Canadians being there for each other, supporting one another, respecting each other, that has to be here to stay."

He complained that the truckers were affecting Canadians' lives with their protest.

To which Toronto Sun columnist Brian Lilley responded that it was like "pouring gas on the fire."

WND reported only a day earlier that it may have been "small" and "fringe" as Trudeau claimed when the first truckers hit their ignitions, but now it's many thousands of people.

Fox News described how Ottawa police are fully occupied with demonstrations around the Canadian capital and they've moved to arresting protesters and seizing vehicles – even arresting people carrying fuel to the trucks – in an effort to suppress the messaging.

Over the weekend, Ottawa Mayor Jim Watson declared a state of emergency over the "Freedom Convoy" and the truckers say they are staying until the government rolls back vaccine – and mask – demands.

At one point, truckers who blocked a key route between Canada and the U.S. released a statement to makes sure people understood the fight: "While using emergency powers, our provincial and federal governments, with the assistance of health departments, have systematically taken away our rights and freedoms. We, the people, call on Jason Kenney and Justin Trudeau to immediately stop and retract all provincial and federal mandates and emergency health measures. We call on the premier to do the right thing. The people have spoken."