The actions of the federal bureaucracy under Democrat presidents has left suspicions abounding in recent years. Recall what happened under Barack Obama when partisans created the now-debunked Russia collusion conspiracy theory.

It was FBI, DOJ and other federal operations that now know their employees were at work on it.

In fact, special counsel John Durham already has obtained one conviction and has filed two other cases over those clandestine operations – and his investigation appears to not have hit its full stride yet.

Then there were the IRS attacks on conservatives under Obama. And more.

Under Joe Biden, there have been all types of claims about misbehavior on the part of his appointees, the Capitol Police, various bureaucrats and more.

But the new claim from U.S. Rep. Louie Gohmert, R-Texas, appears to take it to an entirely new – and illegal – level.

In an announcement on his website, he shared that the executive branch has been intercepting and marking his mail.

"In January, my staff received a letter addressed to my official office from a Christian missionary, which was already opened and stamped 'DOJ MAILROOM' with a date and 'X-RAYED' on the stamp. Last week, my office received a second piece of mail from a constituent, mailed from east Texas and postmarked September 2021. It took four-and-a-half months to reach my office and was also opened and bore a stamp from the DOJ," he explained.

"It is deeply concerning that Legislative Branch mail is somehow being co-mingled with Executive Branch mail when we have completely different proprietary zip codes. We are separate but co-equal branches of government. Even if it were a mistake to deliver Congress’ mail to the DOJ, the DOJ has an obligation to immediately notify Congress and forward the mail without opening it," he said. 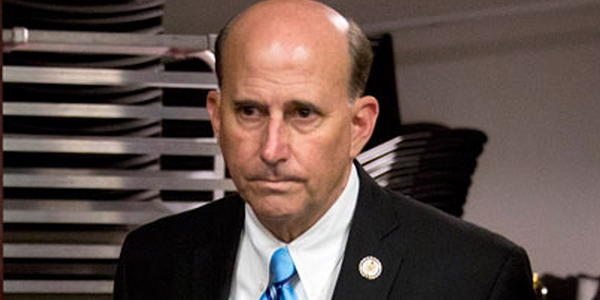 "It is gravely concerning that since congressional mail is constitutionally protected under the Speech and Debate Clause of the Constitution, it could be routed, intentionally or not, through the highly partisan DOJ," he said.

"This is felonious behavior."

He said, "Given reports breaking today of an Inspector General's investigation being opened after another Republican member alleged Speaker Pelosi’s Capitol Police were in his personal office photographing his work product, the Democrats' spying on political opponents appears to know no end."

He explained security already is in place with Pelosi demanding congressional offices "to turn in names, dates, and times of our meetings, along with the purpose of the meeting, for our constituents to be allowed entrance into our office buildings to meet with their duly elected member of Congress."

"Then, we are told, she has the Capitol Police doing opposition research that is catalogued for later use. We have never ever seen a Congress so partisan to such an unethical and illegal extent. The people behind this should be hoping and praying that they will not be treated in the same manner in which they are running roughshod over Republicans when and if Republicans retake the majority."

At an online site, DJHJMedia.com, a newsletter cited the report just a day earlier that Rep. Troy Nehls said Capitol Police entered his office, took photographs of his work papers, and returned and "harassed" a staffer.

"A spokesperson for the Capitol Police pointed to a statement by Chief Thomas Manger," the report said, and Manger claimed, "(There was) no case investigation was ever initiated or conducted into the representative or his staff."

"That statement is laughable. Assuming he isn’t lying through his corrupt teeth, how does he explain the fact that they were disguised as construction workers and harassed the staffer with pictures they had taken two days before of Nehl’s work product? The investigation into this illegal activity will be run by the same people who exonerated the Capitol policeman that murdered Ashli Babbitt. Feel confident?" the newsletter said.

WND reported this week that a report in the Federalist revealed that Capitol Police may have been "inappropriately surveilling elected members of Congress, their staff, and visitors to their offices."

The publication explained it has learned the inspector general for the USCP has opened a formal investigation into the behavior of "the law enforcement agency tasked with security the Capitol."

The review, the report said, follows "news reports and accusations from lawmakers that USCP has overstepped its bounds as it tries to recover from the January 6 riots that tarnished both the Capitol and the reputation of the law enforcement agency that was supposed to keep it safe."

Manger confirmed the investigation in comments to members of Congress.

"While I am confident in our methods, I am asking the USCP Office of the Inspector General to review the USCP’s programs related to these security assessments to assure both this committee, the Congress as a whole, and the public that these processes are legal, necessary, and appropriate," he said in a written response to GOP lawmakers who raised questions about the actions.

The report explained just last November a Capitol Police officer went into the office of Nehls, a Republican from Texas, and photographed work documents.

The official story is that there was concern about a "veiled threat" to the congressman, but that essentially was debunked when Nehls confirmed police never contacted him with any warning.

Rep. Rodney Davis, R-Ill., said there are a lot of questions for Capitol Police to answer, and his worry is that, "Security decisions are being made based on politics, not on real data."