Two years into the COVID pandemic it's pretty clear that many of the early prognostications and government directives have not aged well. I myself made bold observations and predictions in mid May 2020 concerning who was at risk, how great was the risk and how many would ultimately succumb to the disease in 2020.

Since people like Anthony Fauci are facing judgment and ridicule for policies like his infamous mask flip-flopping, it's only fair that my own early predictions and assessments face similar scrutiny from the people who berate him so.

Therefore, I will self-critique my early article right here and grade it by idea presented, to see how well it has aged.

I opened that article by citing the disagreement among policymakers as to whether lockdowns should be lengthened or terminated, noting that everyone had his own spin on the data to support evolving positions.

I also posited that people's most basic questions were not being answered by public health officials. Questions like "What is the real threat level of COVID-19 to me and my loved ones?" and "Is it really safe to go back to work, go to a restaurant, a store or a park?" I also noted, "We want to know whether or not our leaders are doing the right things and whether or not life will ever be normal again."

Unfortunately, two years into it, and we still don't have honest and forthcoming answers to such basic questions from the administration and legacy media.

For that we have to go to the alleged "renegades" (who are actually elite scientists and doctors), like Dr. Peter McCullough, Dr. Robert Malone, Dr. Richard Urso, Dr. Harvey Risch and many others to get transparent answers to such basic questions.

The FDA, NIH and the on-patent COVID countermeasure manufacturers? They're now colluding to withhold answers to such basic questions with their latest court filings.

So, I'll give myself an "A" for observing that people wanted answers to such basic questions (and still do). That one has aged quite well.

My early article then goes on to reveal analysis of early CDC data, and my original chart is posted below. It correctly shows the age tiers of threat where children experience virtually no threat at all, older people experience significant threat, and those in between experience limited threat. Almost two years later, the concept of age tiered threat is now accepted as established scientific fact despite several variants of SARS-CoV-2 with varying disease profiles. 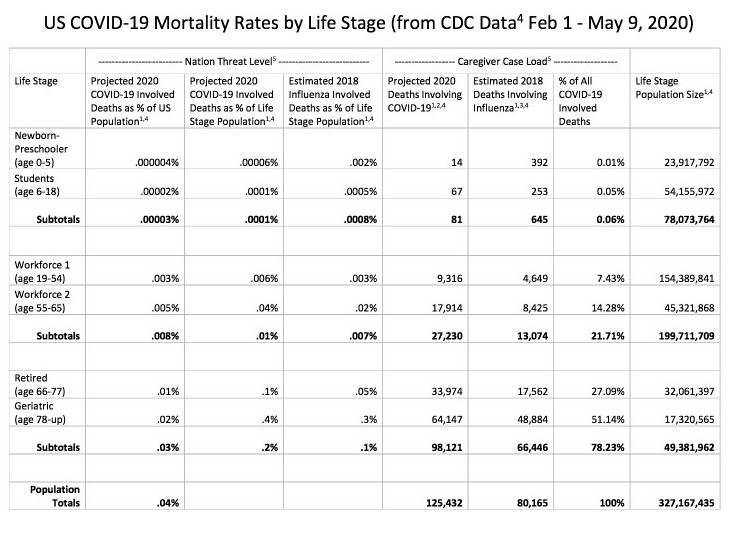 So, I'll give myself a "B" for this part since all I did was analyze CDC's data. Anyone could have done the same thing since the underlying data was publicly available. And obviously everyone deep into the response already knew these things from the same underlying data.

As part of that analysis, I also noted the difference between COVID-involved deaths and deaths where COVID was the primary cause. But it was buried in footnote (2) of the chart, and I failed to question it vigorously at the time.

But then, this was when I still believed that the CDC was on the side of the people instead of the side of Big Pharma.

I'll give myself a "D" instead of an "F" since the observation itself has aged well, but my viewing of this manipulation as a politically motivated attempt to cook the numbers in order to hurt Trump, and my lack of vigorously questioning motives beyond that, has not aged well at all.

Doctors don't tell patients with chest pain to go home until they have a myocardial infarction.

Doctors don't tell patients with diabetes to go home until they're blind.

I never dreamed that doctors would tell patients with COVID to go home until they turn blue from lack of oxygen because their lungs are clotting. I had faith that someone among the brilliant and innovative people who prevent heart attacks, who cure cancer, who get patients through diabetes would come up with treatments.

When I wrote the original article, I thought government was on the side of the people. So, I thought they would facilitate the same aggressive early treatment for COVID patients that they do for heart disease, cancer, and diabetes patients.

But government agencies did the opposite. They did everything in their power, including politicizing pharmaceutical products, coopting the legacy media to gaslight the public and coercing institutions to commit career assassination, to name but a few tactics, in order to halt early treatment of COVID.

If all of these tools would have been used, death rates would look different. There are a lot of highly credentialed people who are talking numbers of needless deaths that could have been prevented that, when subtracted from the official number and adjusted for not having protocols until a few months in, look a whole lot like my original projection.

I can understand important people ignoring some obscure data jockey like me when I originally posted my analysis. But now when we have a bunch of elite scientists and doctors all saying that we're focusing on the wrong demographics and a whole bunch of people died who didn't have too, isn't it time to listen to them and pivot on policy?

The problem is that successfully dealing with COVID is not the agenda of the current administration. And that is a very difficult red pill to swallow. But is there any other conclusion to draw given their continuing war on early treatment? Just as in my original piece, the numbers tell the real story of what is going on.