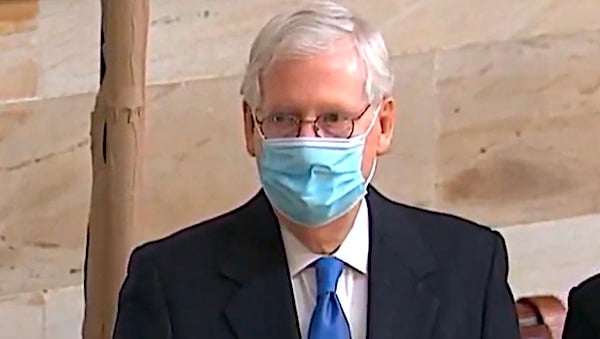 The government report, Schweizer said, shows how how McConnell’s wife used her position as transportation secretary under President Trump to benefit her family.

The Senate minority leader's father-in-law is the founder of the Foremost Group, which owns some of the largest cargo ships in the world and profits from contracts with the Chinese military.

Schweizer previously spotlighted McConnell's relationships in an interview with WND in 2018 about his book "Secret Empires: How the American Political Class Hides Corruption and Enriches Family and Friends." The book centered on what he calls "corruption by proxy," in which family and friends of powerful political figures position themselves as middlemen, creating "previously unimaginable pathways to wealth."

Elaine Chao's sister Angela Chao is now the CEO of Foremost Group. She sat on the board of directors of the China State Shipbuilding Corporation, which builds ships for the People’s Liberation Army Navy.

McConnell has received millions of dollars in political contributions from members of the Chao family. And more than a decade ago, he received a personal gift from father-in-law of between $5 million and $25 million that, at least, quadrupled his net worth overnight.

Schweizer spelled out the problem of divided loyalties in a recent interview with the The Star News Network.

"You have this fusing of the Chao family and Mitch McConnell to the Chinese state, and it creates a circumstance, if McConnell were to do something that Beijing didn’t like, they could literally destroy the business overnight," he said.

WND has been reporting Chao's ties to Chinese leadership and her influence on U.S.-China policy for two decades. In January 2001, when Elaine Chao was first nominated to be Bush's secretary of labor, WND interviewed noted Chinese dissident Harry Wu, who expressed concern about Chao's "business relationship with communist China."

Meanwhile, McConnell, who took hardline positions against the communist regime in the Senate prior to his marriage in 1993, has become one of China's biggest Republican boosters.

He met with high-ranking Chinese officials in 1994 through a personal invitation from the the China State Shipbuilding Corporation arranged by James Chao. McConnell met with Jiang, then the country's president, and vice-premiere Li Lanqing. After the meeting, McConnell increasingly avoided public criticism of China. There were ore meetings like it followed in the years to come.

McConnell notably defended China in its actions against Hong Kong and Taiwan, declaring "the United States needed to be 'ambiguous' as to whether we would come to the defense of Taiwan if attacked by China."

The Kentucky senator cosponsored a bill to eliminate the requirement that China document annual progress on human rights to maintain its trade status in the aftermath of the Tiananmen Square massacre.

McConnell also fought attempts to punish China for vigorously undervaluing its currency. When Chao served as secretary of labor under Bush, her department resisted efforts to call out the Chinese government over its workers' rights practices."

Significantly, Chao criticized a bipartisan congressional report in 2000 citing Chinese espionage against the U.S., dismissing the idea that China could pose any threat to the United States.

Schweizer has reported over many years that China has sought to gain leverage over American politicians by targeting their families with investment opportunities and business deals, including Joe Biden.

It was Schweizer who first put a spotlight on Biden family deals with China and other nations carried out by Joe Biden's son Hunter Biden and brother James Biden.