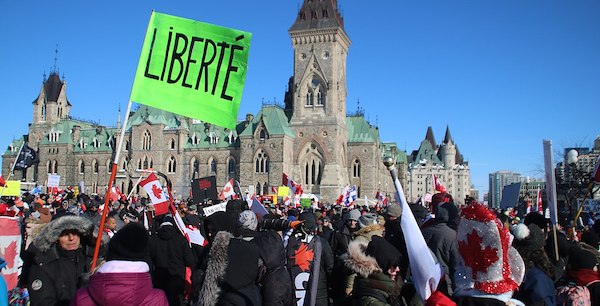 One day after Prime Minister Justin Trudeau invoked Canada's Emergencies Act to quell the trucker protest, the police chief of the nation's capital city has resigned.

Sources told CBC News that Peter Sloly was preparing to announce his resignation publicly amid the Ottawa police force's inability to handle the protest, which has entered its 19th day. The police chief has been accused of bullying and volatile behavior that has undermined his relationship with senior leadership, CBC reported.

On Monday, Trudeau invoked Canada's Emergencies Act for the first time since his father, Pierre Trudeau, did it half a century ago.

Explaining the extraordinary move, Trudeau said "it is clear that there are serious challenges to law enforcement's ability to effectively enforce the law."

Canadian Public Safety Minister Marco Mendicino said Monday that police need to begin using their broad authority under the Emergencies Act, which allows the government to ban the blockades and tow away trucks.

"We need law enforcement to take the reins, to utilize the Emergencies Act and to enforce," he said after Trudeau invoked the act. "We have given new powers to police and we need them to do the job now."

Trudeau insisted the government is not "using the Emergencies Act to call in the military."

"We are not limiting freedom of speech, freedom of assembly and people's right to protest freely," he insisted.

"Consider yourselves warned," she said. "If your truck is used in these blockades, your corporate accounts will be frozen. The insurance on your vehicle will be suspended. Send your rigs home."

Freeland also announced Monday that the federal government is targeting the crowd-funding of the truckers through the nation's terrorist-finance law.

Freeland is a member of the board of trustees of the World Economic Forum, the group that hosts the elite Davos conference and sees the COVID-19 pandemic as an opportunity to "reset capitalism" and accelerate its globalist aims. Trudeau also is closely tied to WEF. Along with Freeland and other members of his cabinet, Trudeau has received training from founder Klaus Schwab's Young Global Leaders organization.

Schwab has had Chinese Communist Party leader Xi Jinping open the two most recent Davos conferences, hailing him as a model leader. Trudeau, in fact, has expressed his admiration for the flexibility Beijing's dictatorship enjoys to get things done:

When they tell you who they are, believe them. pic.twitter.com/BuoNv874iZ

The Canadian Civil Liberties Association condemned Trudeau's invocation of the Emergencies Act, contending the protests didn't meet the standard. The group argued the act exists for "the ability of the Government of Canada to preserve the sovereignty, security and territorial integrity of Canada" and is reserved for actions that "cannot be effectively dealt with under any other law of Canada."

A woman in Peterborough, Ontario, videoed a visit to her home from an Ontario Provincial Police officer who admitted to monitoring her Facebook comments in support of the truckers.

Holy s***.
Police show up to a woman’s home in Canada. She committed no crime. Has done nothing. They admit to MONITORING her Facebook comments in support of the Truckers. The Gestapo agent quivers & blankly stares into the middle-distance when called outpic.twitter.com/8CTpMbHZr9

The Canadian trucker protest has the support of a majority of American voters, according to a Rasmussen poll released Tuesday. The survey found 59% of likely U.S. voters support the protest, including 42% who strongly support it. Only 33% were opposed, including 21% who are strongly opposed.

Meanwhile, Ontario Premier Doug Ford has announced the end of the province's vaccine passport program, acknowledging it was a failure.

He said "it doesn’t matter if you've had one shot or 10 shots, you can catch COVID."

Prime Minister Trudeau, he pointed out, was one of "hundreds" of people he know who caught COVID after getting three shots.