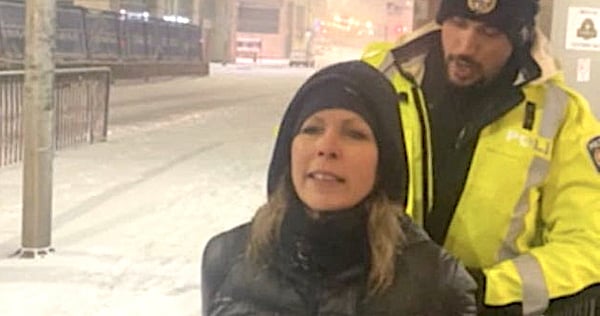 Police in Canada's capital said Friday morning they have launched a sweep to arrest Freedom Convoy protesters against the government's COVID vaccine mandates as the Parliament delayed a vote needed by Prime Minister Justin Trudeau to continue using powers under the Emergencies Act.

Earlier Thursday, Deputy Prime Minister Chrystia Freeland announced that bank accounts of donors to the trucker protesters had been frozen and online fundraising is being tracked by the government's anti-money-laundering unit. Thursday evening key protest leaders Tamara Lich, 47, and Christopher Barber, 46, were arrested as police imposed a "secure zone" with 100 checkpoints around the perimeter to cut off support for the demonstrators.

Lich launched the GoFundMe account that was shut down after it raised millions for participants in the protest.

Tamara Lich has been arrested, but we will continue to #holdtheline pic.twitter.com/GaPZdsrhVe

Lich posted a clip to social media Wednesday in which she said she was expecting to be arrested. She thanks supporters and said she was "ready" and "not afraid."

"Some protesters are surrendering and are being arrested. We ask protesters to remain peaceful and lawful," the alert said.

Ottawa's police chief, Peter Sloly, resigned this week amid criticism that he was not quelling the protest. His successor, interim Police Chief Steve Bell, has vowed to end the protest this weekend.

"We absolutely are committed to end this unlawful demonstration. We have the plan, we have the commitment, we have the resources," Bell said Thursday at a news conference.

Police are starting to make arrests, many protesters who have formed a line in front of police remain @ctvottawa pic.twitter.com/eWhrTZzYo1

Thousands of police have surrounded the Ottawa convoy over the course of the past 90 mins. More continue to come in to back up the front line, which has been methodically pushing in, foot by foot. An air of panic on the ground. Starting to feel like the beginning of the end pic.twitter.com/K2EI6uQE0c

Police in Ottawa are hitting protesters to the ground and kneeing them. pic.twitter.com/Kr2L0t7dyB

Armed police are removing people from their vehicles in Ottawa. pic.twitter.com/81AmSBXkuf

This is Nick, he has been here a week. He just got arrested. Nick says they broke three of his windows to get him out of his car #cdnpoli #ottnews pic.twitter.com/s6tvSfG7qI

Canadian law requires that the Emergencies Act be brought before Parliament within seven days for approval. With the canceling of the vote Friday, the House of Commons will be required to act by Monday.

"The government should not have the power to close the bank accounts of Canadians on a whim," Bergen told Parliament.

"I urge all members of this House: Proceed with extreme caution. Now is the time to stand up for your constituents, to show real leadership, to help heal our divisions, to listen to those we disagree with."

I'm disturbed & saddened by what we are seeing today in Ottawa. This situation was created by the PM & his desire to divide Canadians. It’s time for MPs to return to the House tomorrow to stop the overreach by this government & restore unity, wholeness & hope back to our nation.

Conservative Party member Dane Lloyd pointed out to Trudeau that the deputy director of intelligence for FINTRAC, the anti-money-laundering intelligence unit, told Parliament there is no evidence that the funding of the protesters on which the government is cracking down is tied to "ideologically motivated extremism."

He asked Trudeau to explain the basis for the government freezing the accounts of Canadians.

Trudeau didn't answer the question, instead restating is insistence that the invoking of the Emergencies Act doesn't take away the basic rights of citizens guaranteed by the nation's charter.

“Deputy Director of Intelligence for FINTRAC Barry MacKillop stated there is no evidence that this funding in Ottawa is tied to ideologically motivated extremism…under what basis is this Government freezing accounts of Canadians?”