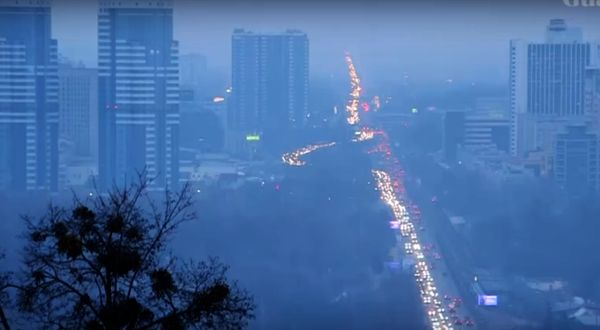 An investigation by the Daily Mail from the United Kingdom has revealed that many Americans were fleeing Ukraine in buses to neighboring Romania as Vladimir Putin's military struck the nation on Thursday, but thousands still were left behind.

While the administration of Joe Biden has issued advisories for Americans to leave Ukraine in recent days the situation was reminiscent of his abrupt withdrawal of American troops from Afghanistan months ago, at a time when he left behind hundreds of Americas, thousands of U.S.-supporting nationals and some $80 billion in war machinery for the terrorists of the Taliban to have.

The Daily Mail's review explained a Project Dynamo was operating, set up by Bryan Stern, a 26-year military vet, to take Americans from Ukraine on buses on Romania.

The publication explained it spoke with individuals among 23 Americans leaving Kiev in several vehicles on Thursday.

Stern, who reportedly saved some 2,000 people trying to escape from Kabul last year, was helping American evacuees into several vehicles which were being driven to Romania while "missiles fell from the sky," the report said.

The U.S. State Department has been unable to provide a number of Americans left in Ukraine but estimates are as high as 30,000. Officials now are telling anyone still there to go by land to Poland, Romania, Hungary, Slovakia or Moldova.

"There are thousands of Americans and NATO ally-citizens that are left in Ukraine right now and it's about to be Soviet-occupied Russia," Stern, a former Navy Lt. Commander, told DailyMail.com.

He said there were 23 in two vehicles, including an American woman who arrived in Kiev for her father's funeral only days ago.

Stern said the individuals were still in Ukraine for a variety of reasons,.

"None of them thought this would happen. There is just total disbelief. Deep down, we thought 'he's not Saddam Hussein. He is not that bad.' But just like that, he achieved war criminal status," Stern said on Russia President Putin.

He explained that in some perspectives, evacuating Americans from Afghanistan wasn't has difficult since the Taliban at that time wasn't using air missiles and such.

The report explained, "Stern said he has not asked the group if they feel abandoned by Biden, but he sided with the U.S. military decision not to 'rush in to World War III.' 'I actually agree right now from the U.S. government perspective that at least for now, in these early days, that the military is not here.'"

He noted Biden went on television to say, "leave now, we will not come and get you."

"As much as that pains me to hear, I appreciate the honesty of those statements. I haven't asked them [if they've felt abandoned] ... but I can tell you at least two people have cried in my arms," he told the publication.

He said he expects "the mess and chaos of Kabul times 100."

Flights all were canceled in the region as the airports were shut down by the missile attacks.

The scenario in Kabul was slightly different, as American troops had been on the ground, but abruptly were pulled out on Biden's orders.

That left at risk the hundreds of American citizens who were still there, the thousands of Afghanis who supported the U.S., as well as all that war machinery, including Black Hawk helicopters and Humvees.

Human Rights Watch then confirmed many former police and intelligence officers left behind in the pullout were being executed.

The Taliban had announced "amnesty" but the HRW's "'No Forgiveness for People Like You,' Executions and Enforced Disappearances in Afghanistan under the Taliban" report confirmed at least 100 dead at the time of that report.

"The Taliban leadership’s promised amnesty has not stopped local commanders from summarily executing or disappearing former Afghan security force members," explained Patricia Gossman, associate Asia director at Human Rights Watch. "The burden is on the Taliban to prevent further killings, hold those responsible to account, and compensate the victims’ families."

The Daily Caller News Foundation also revealed that a Taliban official was open about the terrorist group's plans to return harsh punishments to the country.

Mullah Nooruddin Turabi, who previously served as the Taliban’s justice minister and is now serving to enforce its extreme interpretation of Islam, told the Associated Press that the country will be ruled under strict Islamic law and return to executions and cutting off hands.

At one point, a report contended "that the State Department believes as many as 14,000 United States legal permanent residents remain in Afghanistan."