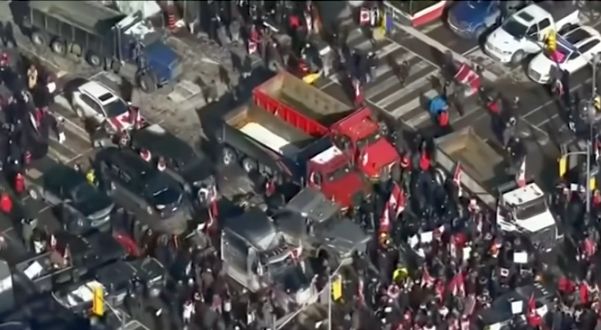 There already have been truckers protesting in Alaska, and other countries, in support of the Canadian truckers' convoy that has been battling that nation's extreme COVID mandates.

Hundreds of thousands of people have converged on Paris on the same issue.

Now an actor, Ricky Schroder of "Silver Spoons," has called on U.S. truckers to join up and "shut down" Washington, and the state capitals, because of the mandates.

The New York Post said the 51-year-old appeared in a video, holding a Bible and focusing on Canada's "Freedom Convoy" protesters.

"I think we see what we’re facing here. It’s an evil that is trying to be forced upon our children, upon us. And God bless the Canadian truckers and the Canadian cowboys up there on the border," he said.

He cited the "great potential" for related protests.

"Our truckers are gonna maybe start mobilizing and doing what we need to do, which is shut down D.C., shut down Sacramento, shut down Albany, shut down these states and these [capitals] until we root out this evil that was almost perpetrated on us,” the actor said. “We were so asleep."

The U.S. Department of Homeland Security already is worried, issuing a bulletin earlier in the week about the potential for such protests in the U.S.

Reports have explained a U.S. convoy could begin in California in the next week or so and end up in Washington. Officials also have expressed worry that truckers might clog up access to this weekend's Super Bowl football game

The Washington Examiner pointed out that French truckers and protesters, "taking inspiration from Canada's Freedom Convoy," were in the streets of Paris protesting mandates there.

The report said, "The convoy made its way to Paris from southern France, but more convoys are anticipated to arrive in the capital from other parts of the country."

An estimated 359,000 people were involved, said a Facebook page linked to the activism.

"We are just tired of it all. We want to go where we want without being asked for a vaccine pass. At least with this action, I am doing something," Nicolas Bourrat, a truck driver, said in the report.

Similar movements already have begun in New Zealand and Australia, too.

Meanwhile, a Fox News report explained that those Canadian truckers are in it for the long haul.