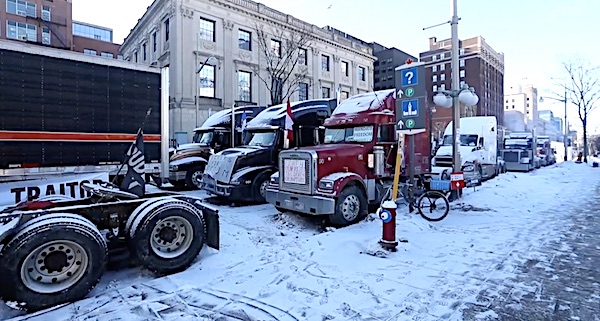 Anti-mandate truckers on the streets of Ottawa, Canada, on Feb. 15, 2022, as part of the Freedom Convoy.

A woman who donated to the Freedom Convoy, a group of truckers and individuals protesting Canada’s vaccine mandates and COVID-19 restrictions, was forced to close her gelato store after her information was leaked in a hack of GiveSendGo.

Tammy Giuliani, owner of Stella Luna Gelato Café in Ottawa, Ontario, said in an interview with the Ottawa Citizen that she was forced to close down her store after she began receiving threats. Giuliani’s name appears on a list of Freedom Convoy donors stolen from crowdfunding site GiveSendGo on Sunday and published online, the Daily Caller News Foundation confirmed.

Giuliani said she told staff to go home for their own safety and reported the threats to the police. She confirmed to the Ottawa Citizen that she made a $250 donation to the Freedom Convoy on Feb. 5, and she said she was initially inspired by the protesters’ goal of easing COVID-19 restrictions.

“When a group of people first decided they were going to travel across the country to spread this message of solidarity, it seemed like a beacon of hope for small businesses like us,” she told the Ottawa Citizen. “It’s no surprise that small businesses have been on the edge. Families are at risk of losing their livelihood. I’m a sucker for a grassroots cause.”

However, as the protests grew more disruptive, Giuliani told the Ottawa Citizen that she regretted her decision. Giuliani did not respond to the Daily Caller News Foundation’s requests for comment.

Giuliani is not the only Canadian affected by the GiveSendGo hack; Marion Isabeau-Ringuette, communications director for the Ontario Solicitor General, stepped down after her donation to the Freedom Convoy was revealed.