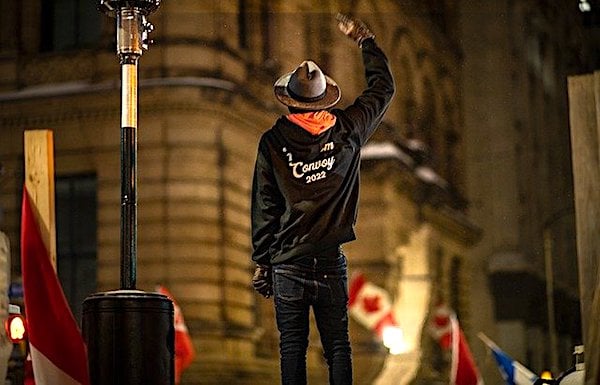 A pro-freedom activist supports truckers as they roll through Ottawa, Canada, in the winter of 2022 as part of the anti-mandate Freedom Convoy. (Image by Ana Krach from Pixabay)

The Christian crowdfunding website GiveSendGo, which stepped up and began handling donations for the truckers convoy protest against extreme COVID mandates across Canada when another, politicized, website tried to cancel the effort, has been hacked.

The site was restored by Monday morning, but for a number of hours over the weekend those going to the website were redirected to another page, GiveSendGone(dot)wtf, where a segment of Disney's "Frozen" cartoon was posted.

The Washington Examiner said the hackers were unidentified, but on the page to which supporters were redirected condemned GiveSendGo for allowing the truckers to raise support.

They also condemned the trucker rallies, claiming that some of the protesters "may not simply be ordinary truckers who are fed up with masks and vaccine mandates and that they may be Trojan Horse attacks," the Examiner explained the wild claims included.

The hackers also charged the Freedom Convoy was an "insurrection," a term that Democrats in America, for political reasons, have continually applied to anyone who even expressed concern about the processes and results of the 2020 presidential race

The report said the hackers also claimed to have already leaked donors' data from the Freedom Convoy effort, threatened them with disclosure of names, addresses and more.

"The whistleblower website DDoSecrets says they received a copy of the donor data and will provide it to journalists and researchers upon request. It is unclear who else has it," the report said.

The fundraising website has been under attack since it began allowing the truckers to fundraise there. Last week, researchers disclosed what they said was an unsecured Amazon S3 bucket of data with user data.

The manifesto posted by hackers said, "On behalf of sane people worldwide who wish to continue living in a democracy, I am now telling you that GiveSendGo itself is frozen," according to footage posted by Daily Dot's Mikael Thalen.

The demonstrations in Canada now have been going on for more than two weeks with truckers and their supporters blockading streets around the nation's parliament.

It's already proven to be successful, which several provinces now relenting on their vaccine mandates that were being targeted by the protesters.

The website Distributed Denial of Secrets, which claimed to have megabytes of donor information, promised to release that information to reporters and researchers.

BREAKING: GiveSendGo, the crowdfunding website used by the Freedom Convoy, is now redirecting to the domain GiveSendGone[.]wtf.

A video from the Disney film Frozen now appears alongside a manifesto condemning the website and the Freedom Convoy. pic.twitter.com/3TLAwfvZ3w

A judge in Canada earlier ordered frozen the GiveSendGo Money – which was in the millions of dollars – for the convoy effort, but the website, based in the U.S., pointed out the judge had no jurisdiction to issue such an order.

The work earlier had been done at GoFundMe, but that site turned political and decided to try to cancel the convoy organization.

GoFundMe now is under investigation in several states for its politicized actions.

Bob Unruh
Bob Unruh joined WND in 2006 after nearly three decades with the Associated Press, as well as several Upper Midwest newspapers, where he covered everything from legislative battles and sports to tornadoes and homicidal survivalists. He is also a photographer whose scenic work has been used commercially.
Rubio calls out Air Force for 'drag' event, gets it canceled
Arresting the 'dangerous,' censoring news authorized by secret directives
Majorities say Biden shows he is too old, not fit to be president
Creative artist asks Supreme Court to enforce free speech rights
Taxpayer-funded NPR unleashes claim Republicans want Constitution gutted
See more...