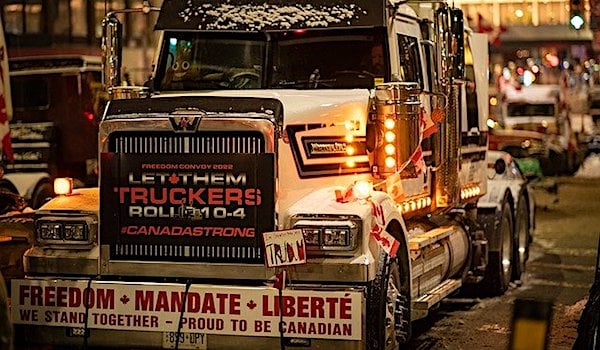 For the first time since his father did it half a century ago, Canadian Prime Minister Justin Trudeau has declared a national emergency, invoking extraordinary powers as the trucker-led protests against COVID-19 vaccine mandates continued for their 18th day.

"It is now clear that there are serious challenges to law enforcement's ability to effectively enforce the law," Trudeau said at a news conference Monday afternoon in Ottawa.

Trudeau said the government is not "using the Emergencies Act to call in the military."

"We are not limiting freedom of speech, freedom of assembly and people's right to protest freely," he insisted.

However, invoking the act gives the federal government, among other things, the right to ban public assembly and seize property to restore order, Canada’s CBC News reported.

And the premiers of four Canadian provinces -- Alberta, Manitoba, Quebec and Saskatchewan -- spoke out against the move.

"[This is] not a peaceful protest."pic.twitter.com/KUPAXIXFTl

Meanwhile, Canada's deputy prime minister and minister of finance, Chrystia Freeland, announced Monday that the federal government is targeting the crowd-funding of the truckers leading the protest through a terror-finance law.

"We are broadening the scope of Canada's anti-money laundering and terrorist-financing rules so that they cover crowd funding platforms and the payment service providers they use," Freeland said in a televised announcement.

The minister said the "illegal blockades have highlighted the fact that crowd-funding platforms and some of the payment service providers they use are not fully captured under the Proceeds of Crime and Terrorist Financing Act."

Freeland is a member of the board of trustees of the World Economic Forum, the group that hosts the elite Davos conference and has declared the COVID-19 pandemic as an opportunity to "reset capitalism" and accelerate its globalist aims.

Trudeau also is closely tied to WEF. Along with Freeland and other members of his cabinet, he was part of founder Klaus Schwab's Young Global Leaders organization.

She says banks may now seize accounts without a warrant. pic.twitter.com/pRTKxIxllY

Reacting to Trudeau's use of the Emergencies Act to "supplement provincial and territorial capacity to address the blockades and occupations," Alberta Premier Jason Kenney accused the prime minister of overreach.

"We have the operational resources that we need to enforce, and I think at this point for the federal government to reach in over top of us without offering anything in particular would frankly be unhelpful," he said.

Kenney said he's "concerned that there's a certain kind of person that if the federal government proceeds with this, who will be further inflamed and that could lead to prolongation of some of these protests."

Manitoba Premier Heather Stefanson said in a statement that "the sweeping effects and signals associated with the never-before-used Emergencies Act are not constructive here in Manitoba, where caution must be taken against overreach and unintended negative consequences."

'The illegal blockades must end, but police already have sufficient tools to enforce the law and clear the blockades, as they did over the weekend in Windsor," he wrote on Twitter. "Therefore, Saskatchewan does not support the Trudeau government invoking the Emergencies Act."

Premier François Legault of Quebec, which was the target of Pierre Trudeau's Emergences Act crackdown in 1970, told the Montreal Gazette "we do not want a federal state of emergency on the territory of Quebec."