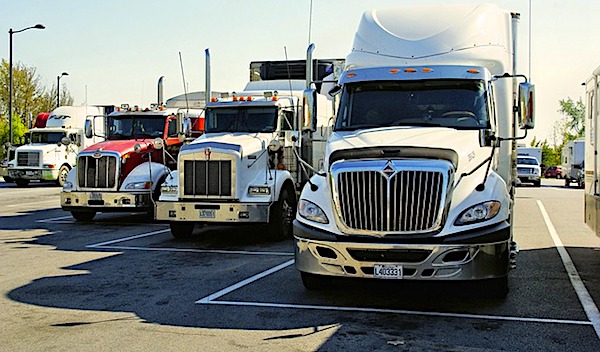 (Image by DEZALB from Pixabay)

Just one of multiple plans that have been revealed for truckers' convoys in America to protest COVID mandates and the multiple impacts of Joe Biden's presidency, such as exploding fuel prices, already is confirming there are 1,000 trucks lined up to take part.

Just imagine 18,000 wheels on the Beltway around Washington, D.C., used by thousands of federal government employees to commute to their offices. That would of course, be in addition to any regular traffic.

"There will be a lane open for emergency vehicles, they’ll be able to get in and out and all that," organizer Bob Bolus, owner of a Pennsylvania company, explained. "We will not compromise anybody’s safety or health, one way or the other. As far as if they can’t get to work, geez that’s too bad."

The plan with which he's working is called the "People's Convoy" and he said it would end up like a "giant boa constrictor" around Washington.

"That basically squeezes you, chokes you and it swallows you, and that’s what we’re going to do to DC," he explained.

The truckers already have the support of most Americans.

Would you support a US-based trucker convoy protest?

It was the Gateway Pundit that confirmed Capitol Police have said they are coordinating with other law enforcement agencies to allow lawful First Amendment activity.

But there already are plans to restore a fence to the perimeter of the U.S. Capitol when the convoy – or convoys – are predicted to arrive – about the time of Biden's State of the Union address on March 1.

"Law enforcement agencies across the National Capital Region are aware of plans for a series of truck convoys arriving in Washington, DC around the time of the State of the Union. As with any demonstration, the USCP will facilitate lawful First Amendment activity," Capitol Police said in a statement.

The Washington Examiner said the movement was inspired by the Canadian "Freedom Convoy," and the People's Convoy is expected to leave Adelanto Stadium near Victorville, California, over the next 48 hours.

"We demand the declaration of National Emergency Concerning the COVID-19 Pandemic be lifted immediately and our cherished Constitution reign supreme," the group explains online.

Spokesman Mike Landis noted, "We, the people, want our country back — the one that we love, Ole Glory, the America, the beautiful and the brave. Because that’s who we are, and what we are, and what we want to continue to be. We do not want to be under a dictatorship, communism-style regime."

But exact locations and timing are not being released at this time.

"To our elected officials that believe they rule us: YOU work for US," the organization said. "Our Constitution was written to provide enough power to act on a national level, but not enough to deprive the people of fundamental rights. The people are prepared to see this challenge through — as we have seen through all challenges to our Freedom in the past. And we will prevail and prosper."

While it was uncertain how many truckers and others would take part, one social media page for the group had some 130,000 members.

WND previously reported that actor Ricky Schroder of "Silver Spoons" fame called on U.S. truckers to join up and "shut down" Washington, and the state capitals, because of the mandates.

The New York Post said the 51-year-old appeared in a video, holding a Bible and focusing on Canada's "Freedom Convoy" protesters.

"I think we see what we’re facing here. It’s an evil that is trying to be forced upon our children, upon us. And God bless the Canadian truckers and the Canadian cowboys up there on the border," he said.

He cited the "great potential" for related protests.

"Our truckers are gonna maybe start mobilizing and doing what we need to do, which is shut down D.C., shut down Sacramento, shut down Albany, shut down these states and these [capitals] until we root out this evil that was almost perpetrated on us,” the actor said. “We were so asleep."

The Washington Examiner pointed out that French truckers and protesters, "taking inspiration from Canada's Freedom Convoy," were in the streets of Paris protesting mandates there.

The report said, "The convoy made its way to Paris from southern France, but more convoys are anticipated to arrive in the capital from other parts of the country."

An estimated 359,000 people were involved, said a Facebook page linked to the activism.

"We are just tired of it all. We want to go where we want without being asked for a vaccine pass. At least with this action, I am doing something," Nicolas Bourrat, a truck driver, said in the report.

Similar movements already have begun in New Zealand and Australia, too. In the United States, several small convoys already have taken place, and there have been discussions about more.

One website offered a Freedom Convoy in America that is scheduled to leave California early in March en route to Washington.