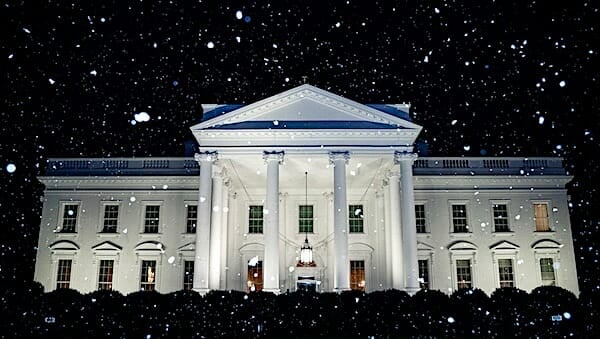 Joe Biden's White House has chosen silence as its response to reporting that describes how Hillary Clinton, the Democrats' presidential candidate in 2016, spied on President Trump when he was a candidate, and continued after he was president.

WND has reported that a legal filing charges Clinton paid an internet company to "infiltrate" servers at the White House and Trump Tower to frame former President Donald Trump.

That narrative, the "Russia collusion" conspiracy theory, was assembled and propagated by Democrats before and after Trump's election in 2016. They claimed he was somehow indebted to Russians, a claim that was completely debunked by a years-long investigation by former FBI chief Robert Mueller.

Trump himself had said – at the time – he was being spied on. And with the information from Durham, released a statement saying: "The latest pleading from Special Counsel Robert Durham provides indisputable evidence that my campaign and presidency were spied on by operatives paid by the Hillary Clinton Campaign in an effort to develop a completely fabricated connection to Russia.

"This is a scandal far greater in scope and magnitude than Watergate and those who were involved in and knew about this spying operation should be subject to criminal prosecution. In a stronger period of time in our country, this crime would have been punishable by death. In addition, reparations should be paid to those in our country who have been damaged by this."

But Biden, who was vice president to Barack Obama at the time, went silent:

The statements from his spokeswoman on this issue are at the 27-minute mark:

Three times Karine Jean-Pierre refused to respond to questions about the issue.

Fox News' Jacqui Heinrich had asked: "Does the president have any concerns about a candidate for president using computer experts to infiltrate computer systems of competing candidates - or even the president-elect - for the goal of creating a narrative ... Is that something ..."

Jean-Pierre interrupted, with, "That's something I can't speak to from this podium so I refer you to the Department of Justice."

Heinrich attempted again: "Is what's been described in that report, monitoring internet traffic, is that spying?"

When Heinrich went another direction, asking, "Generally speaking though, would monitoring internet traffic...," Jean-Pierre said, "My answer's not going to change."

Durham has focused at least partly on suspicions that the Clinton campaign was creating the illusion of Trump links to Russia to distract from questions over Hillary Clinton's use of a private email server for government secrets.

John Ratcliffe, who was Trump's director of National Intelligence, said Biden and Obama knew the Clinton campaign was using the strategy against Trump. He also said Obama's CIA chief,John Brennan told Obama and Biden in 2016 about allegations Clinton as trying to fabricate Trump's links to Russia to distract from the scandal over her deleted emails scandal.

Durham already has obtained indictments against three people, and one has pleaded guilty to altering evidence.

The two others are accused of lying.

Interestingly, it is Jake Sullivan, who now is Biden's national security adviser, who promoted the false Trump-Russia link narrative, stating that a report said a Trump Organization server had been found to be communicating with Russian interests.

Hillary Clinton then repeated that claim on social media.

Former chief investigator of the Trump-Russia probe for the House Intelligence Committee under then-Rep. Devin Nunes, R-Calif., Kash Patel, said the filing "definitively shows that the Hillary Clinton campaign directly funded and ordered its lawyers at Perkins Coie to orchestrate a criminal enterprise to fabricate a connection between President Trump and Russia."

"Per Durham, this arrangement was put in motion in July of 2016, meaning the Hillary Clinton campaign and her lawyers masterminded the most intricate and coordinated conspiracy against Trump when he was both a candidate and later President of the United States while simultaneously perpetuating the bogus Steele Dossier hoax," Patel told Fox News, adding that the lawyers worked to "infiltrate" Trump Tower and White House servers.