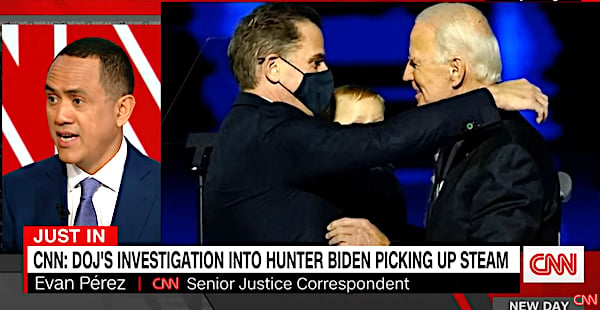 "Just in" was the message on the CNN chyron in a segment Wednesday on the morning show "New Day," signaling to viewers that they were about to hear breaking news.

It turns out that amid a Justice Department investigation of Hunter Biden's foreign business dealings, reported the network's Evan Perez, the president's son was being paid a handsome sum monthly by a Ukrainian energy firm that was under investigation while Joe Biden was overseeing U.S. policy in Ukraine. Which, the CNN reporter deftly pointed out, "raised questions of a conflict."

The fact that there was a conflict of interest worthy of serious investigation was well established long before the 2020 election, as WND and other alternative media outlets reported. But when Joe Biden was running for president, CNN anchors repeated the line that there was "no evidence" of any wrongdoing (see video supercut below). When the New York Post published stories shortly before the election with evidence that Joe Biden not only lied about his knowledge of his son's business deals but profited from them, the network joined the establishment media chorus of "Russia disinformation," based on a letter from former security officials who admitted they had "no evidence" to support their claim.

CNN anchor Anderson Cooper, for example, began a question to Biden during a presidential debate this way: "President Trump has falsely accused your son of doing something wrong while serving on a company board in Ukraine."

Now that the New York Times has belatedly acknowledged what has been available all along to anyone interested in the truth – the authenticity of damning messages on a laptop abandoned by Hunter Biden that indicate Joe Biden's family ran a multimillion-dollar global business peddling access to the White House to Chinese communist operatives, corrupt Ukrainian companies,  Russian oligarchs tied to Vladimir Putin and many others – establishment media are covering the story. Particularly as it appears that Justice Department prosecutors are preparing to indict the president's son on charges that could land him in prison.

On Wednesday, Perez and anchor Brianna Keilar discussed the "new details" in the Hunter Biden investigation. Perez noted that while Hunter Biden has not been indicted, "a lot of activity has picked up" recently, including witnesses testifying to a grand jury in the next few weeks.

CNN on Hunter Biden: Nothing to see here, move along! pic.twitter.com/4ZAJd2lBOt

In a discussion after Perez’s report, CNN’s John Harwood acknowledged it "seems pretty clear that Hunter Biden was trading on his father’s name to make a lot of money."

But Harwood insisted that "until someone makes a nexus between what Hunter Biden has done and official activities of Vice President Biden or President Biden, it’s a not-pretty picture, but it’s not really of much public import in terms of the policy of the United States or the administration of the government."

However, during the hearings for the Democrats’ first impeachment of President Trump in October 2019, then-Deputy Assistant Secretary George Kent testified that he raised concern at the State Department that Hunter Biden’s lucrative position with the Ukrainian energy firm Burisma – paying him $1 million a year – posed a conflict of interest but was rebuffed. An email by Kent that was withheld from Trump’s team during the impeachment proceedings warned that Hunter Biden’s job could "undercut" American efforts to fight corruption in Ukraine, which happened to  be the No. 1 policy objective.

Joe Biden boasted in a panel at a meeting of the Council on Foreign Relations that as vice president he leveraged $1 billion in military aid to pressure Ukraine to fire its top prosecutor, Viktor Shokin, who was investigating Burisma at the time. Defenders of the then-vice president insist Biden pressed for Shokin's ouster because the prosecutor wasn't pursuing any corrupt individuals or companies.

But that, at the very least, sounds to most legal minds like a classic disagreement over the facts warranting an investigation.

In fact, as John Solomon reported for The Hill in September 2019, hundreds of pages of memos and documents from the American team helping Burisma stave off its legal troubles conflict with Biden's narrative, including a plan to stop Ukrainian prosecutors from interviewing Hunter Biden during the 2016 U.S. presidential election.

Among the Biden family's profits from Russia – the messages on the laptop show Hunter Biden's funds were intermingled with Joe Biden's while one message showed a 10% cut from a Communist Party-tied Chinese firm was reserved for the "big guy" – was a $3.5 million wire transfer from an oligarch whose name was on a U.S. Treasury list of figures tied to the Kremlin who were under consideration for sanctions.

In a report released one month after the 2020 election, two Republican-led Senate committees concluded from their investigation that members of Joe Biden's family engaged in deals with Chinese nationals who had "deep connections" to the Communist Party that "bore financial fruit" when Joe Biden "was vice president and after he left office."

The report warned that the "connections and the vast amount of money transferred among and between them don't just raise conflicts of interest concerns, they raise criminal financial, counterintelligence and extortion concerns."

A post-election survey found more than one-third of voters who chose Joe Biden were not aware of the evidence linking the former vice president to corrupt financial dealings with China through his son Hunter. Had they known, according to the survey commissioned by the Media Research Center, President Trump would have won the election, garnering at least 289 Electoral College votes.