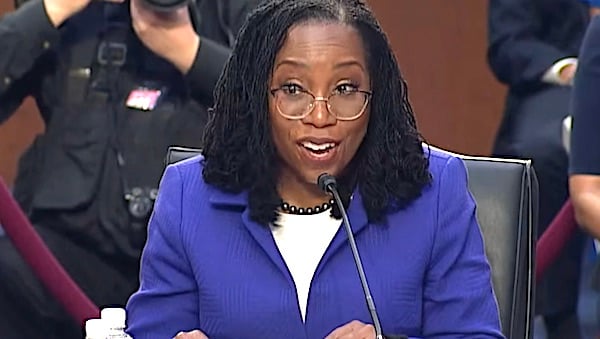 One commentator responded succinctly to Ketanji Jackson's claim to not be able to define "woman" during her Senate confirmation hearings to be Joe Biden's appointee to the Supreme Court.

"If there is a difference between men and women, she’s claims she is unable to discern it. See what seven years at Harvard can do for you!" explained Andrew McCarthy at Fox News.

The senator had asked, "Do you agree with Justice Ginsburg that there are physical differences between men and women that are enduring?"

Jackson begged off, contending she was "not familiar" with that statement from Ginsburg.

Jackson, who was nominated by Biden because she is black and a woman, said, "I do not know how I’d interpret it. I’d need to read the whole thing."

"And can you provide a definition for the word 'woman'?" Blackburn continued.

"Not in this context. I’m not a biologist" Jackson claimed.

"So, you believe the meaning of the word ’woman’ is so unclear and controversial that you can’t give me a definition?" Blackburn said.

The question was a no-win situation for Jackson, as defining "woman" as being female would cause outrage among the leftists who are promoting the transgender ideology across the country, the concept that a man can become a woman, essentially by making that decision.

Responding by that definition, that a "woman" is someone, male or female, who claims to be a woman, would put her at odds with science, and millions of Americans who have not adopted that agenda.

The senator pointed out, "The fact that you can’t give me a straight answer about something as fundamental as what a woman is underscores the dangers of the kind of progressive education that we are hearing about."

McCarthy wrote, "Senate Judiciary Committee Democrats incessantly remind us that the historic milestone marked by Judge Ketanji Brown Jackson’s nomination is that she would become the Supreme Court’s first black woman. Yet, how historically significant can it be if she can’t say what a woman is?"

He explained, "Of course, it is not that someone as erudite and sophisticated as Judge Jackson can’t tell us the answer. It is that she won’t. At times during the hearing, she has put on her best constitutional originalist hat. It was almost like we were listening to the late, great Justice Antonin Scalia himself.

"But it’s a pose. Jackson bobs and weaves, demonstrating that she is well versed in constitutional originalism and statutory textualism – the judicial philosophy that judges must apply the law as written, consistent with its public meaning at the time it was adopted, not make it up as they go along. But Jackson has been careful just to describe this philosophy, not to adopt it as her own."

He explained Jackson is not revealing her own thoughts "because she is smart and grasps that we wouldn’t like the answer very much. She calculates that she has the votes and if she just toughs it out, without revealing anything too alarming, she will be confirmed."