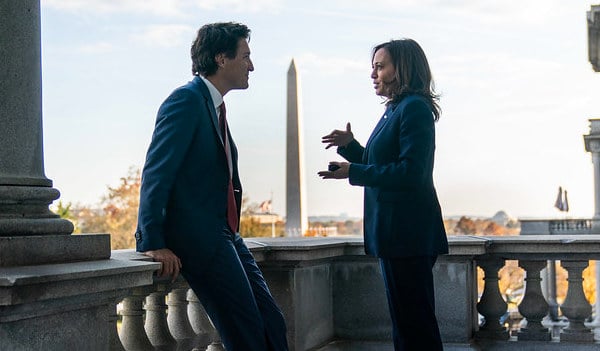 Shortly after Kamala Harris ascended to the office of vice president under Joe Biden, the reports of turmoil in her office started.

A column by Jonah Goldberg in the Los Angeles Times at the time said bluntly, "Things have not gone well for Vice President Kamala Harris. Not only is she less popular than her boss, but according to one recent poll, she even broke Dick Cheney’s record for most unpopular sitting vice president."

It continued, "The White House insists there’s nothing amiss in Harris-land, even as much of her senior staff is jumping ship. And that ship is leaking like a sieve. Festivus arrived early on HMS Harris with disgruntled and loyal staffers alike airing grievances on a daily basis."

Now, in fact, the Daily Mail has confirmed that the 10th staffer is leaving Harris' office.

The latest is Nancy McEldowney, a national security adviser. The report said she's been in the vice president's office since the start of the Biden term, and will be replaced by her deputy, Philip Gordon.

She cited "pressing personal matters" in making the decision.

"This was a difficult decision because I am so deeply committed to the work we do and the crucial national interest we serve. But after more than a year, this is the right decision for my family," she said.

McEldowney's departure comes on the heels of Harris's NATO trip to Poland and Romania, "and after a turbulent first year marked by a number of public messaging failures," the report opined.

On that trip Harris created controversy by laughing at questions about the refugee crisis resulting from the Russian invasion of Ukraine.

And at a later news conference, "she ignored answering a specific question on how long Americans might have to deal with inflation and high gas prices, and instead talked about the plight of those refugees coming from war-torn Ukraine," the Daily Mail said.

The report elaborated: "Staffers in the vice president's office have been jumping ship after a year full of messaging blunders and a barrage of personal attacks on the VP, combined with viral rumors of toxicity within the office and tensions between Harris's and President Biden's offices."

WND previously had reported – when the string of departures was just starting – that a staff member told the Washington Post anonymously, "With Kamala, you have to put up with a constant amount of soul-destroying criticism and also her own lack of confidence. So you’re constantly sort of propping up a bully and it’s not really clear why."

At that time the Daily Wire documented that one of the departures "came on the heels of devastating USA Today/Suffolk University polling that showed Harris earning a dismal 28% approval rating, 10 points behind President Joe Biden’s, who sat at a not-so-pretty 38% approval. Biden is apparently not too happy about Harris’ numbers, with one report saying she’s not even considered to be Biden’s successor in the White House anymore, while another said the president is considering moving her to the Supreme Court so he can pick a new veep who might have a chance to win in 2024."

The Mail said then that, "Joe Biden’s relationship with Kamala Harris is in crisis, with her staff furious that she is being ‘sidelined,’ while the president’s team are increasingly frustrated by how she is playing with American public."

It was CNN where the first reports of Harris' dysfunctional office emerged, with its comment that, "Many current and former West Wing aides say that Vice President Kamala Harris is not being adequately prepared or positioned, and instead is being sidelined, causing frustration among staffers."

The report said those in the vice president's circle are fuming that she's not being "positioned" properly.

Harris had been tasked by Biden with handling Biden's southern border crisis, pushing the Democrats' elections agenda into law, and much more, with little success to date.