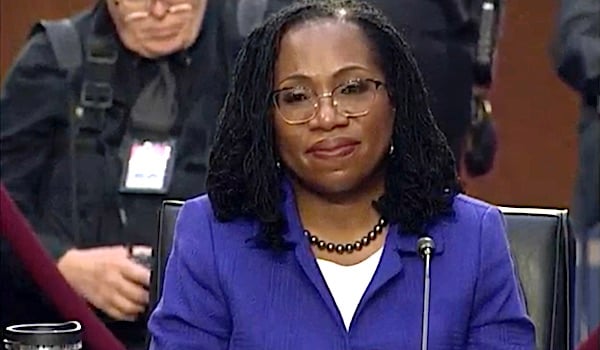 The U.S. Senate hearing for Ketanji Brown Jackson, Joe Biden's nominee to the U.S. Supreme Court, has begun, and Republicans are raising serious questions about her qualifications, especially her affinity for going easy on child-porn offenders.

Democrats have demanded that their nominee be endorsed as she met Biden's qualifications by being black and a woman.

But they started off on the defense, using their opening statements to try to head off the real concerns already raised by members of the GOP over her being "soft" on criminals.

Ronna McDaniel, chairwoman of the Republican National Committee, noted, "Americans will be watching this week as Joe Biden’s nominee must address unanswered questions regarding her radical record, praise of Critical Race Theory, and soft-on-crime sentencing. Ketanji Brown Jackson is the far-left activist judge that Joe Biden promised to nominate, and that out-of-touch agenda will be on full display for the American people this week.”

McDaniel explained that Jackson has a history of embracing Critical Race Theory as well as "an alarming pattern" of treating sex offenders lightly.

She's also attacked the free speech rights of pro-life Americans, demanded that taxpayers give hundreds of millions of dollars to abortionists and repeatedly has ruled against conservative policies.

The GOP fact sheet explained she was reversed when she ruled against President Trump's orders to hold failing federal employees accountable, and she blocked Trump's efforts to manage the flood of illegal aliens at the southern border.

The Washington Times reported the Republicans opened up their comments by noting that Democrats were withholding documents they needed to review to determine Jackson's qualifications.

"Sen. Charles E. Grassley of Iowa explained the senators need to review Jackson’s time serving as vice chair of the U.S. Sentencing Commission from 2010 to 2014. But he said Democrats did not join the GOP in pushing for documents related to her work there," the report said.

He said the government has withheld 48,000 pages of requested information.

"That’s a lot of hiding," the senator said. "The limited number of useful records we received from the Obama White House show exactly why Sentencing Commission documents would have been important. There are a number of dark money groups on the Left that argue federal judges should make policy decisions based on the judges’ own values."

In her time on the U.S. Sentencing Commission, Judge Jackson said she “mistakingly assumed that child pornography offenders are pedophiles” and she wanted “to understand this category of nonpedophiles who obtain child pornography.” pic.twitter.com/ZM16VAqpLo

In United States v. Cooper, in which the criminal had more than 600 images and videos and posted many on a public blog, the Guidelines called for a sentence of 151-188 months. Judge Jackson settled on 60 months, the lowest possible sentence allowed by law.

So far, the Sentencing Commission has refused to turn over all Judge Jackson’s records from her time there. In light of what we have learned, this stonewalling must end. We must get access to all relevant records

Sen. Richard Durbin, a Democrat from Illinois, rejected Hawley's concerns, insisting, "He is wrong, he’s inaccurate and unfair in his analysis."

At Roll Call, a report described the Democrats' defense as the hearing opened Monday.

"Durbin tried to swat away expected questions about her representation of detainees at Guantanamo Bay or other clients, and criticism that she is soft on crime or on sexual offenders," the report said.

And Sen. Patrick J. Leahy, a Vermont Democrat, claimed Jackson "is no judicial activist" and is not anti-law enforcement or soft on crime, the report said.

Grassley noted his priority will to be determine whether Jackson is "committed to the Constitution as originally understood."

He also promised Republicans would be respectful of the nominee, in contrast to the hate-mongering that was launched by Democrats against President Trump's nominees to the court – because they were nominated by a Republican.