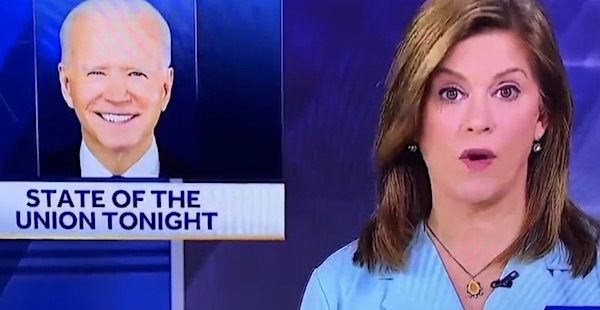 A WTAE-TV newscaster in Pittsburgh voices a news story about an elderly man facing charges for allegedly touching a 12-year-old girl in a Walmart store, while the station aired an image of Joe Biden on March 1, 2022. (Video screenshot)

The script could not have been written any better, as the news universe has a way of baking seemingly unrelated events together into a delicious treat.

The latest slice of broadcast blooper perfection was aired Tuesday evening by WTAE-TV, the local ABC affiliate in Pittsburgh, Pennsylvania.

As the news team was transitioning from coverage of a robbery at a Giant Eagle grocery store in the Squirrel Hill section of Pittsburgh, something extraordinary happened.

What viewers saw on the left side of their screen was an image of Joe Biden, with a "State of the Union Tonight" caption underneath his face.

But the words coming out of the newscaster's mouth were both alarming and hilarious at the same time.

"A 71-year-old man was accused of inappropriately touching a 12-year-old girl at the Walmart in West Mifflin Sunday afternoon," she said.

The airing of the alleged sexual crime involving a white, elderly man took place while Biden's face remained on screen.

"This is one of the greatest live TV moments of all time," said a Twitter user who posted the clip online.

This is one of the greatest live TV moments of all time pic.twitter.com/fXbKvFnAyJ

It turns out the actual suspect is Roger Nigriss, who's now facing charges of indecent assault and unlawful contact with a minor.

But the TV mishap is reminding Americans of Joe Biden's sordid history of touching and caressing people – both male and female – in what many say is an inappropriate manner.

Another Twitter user posted a message saying, "Checks out," with images of some of the previous hands-on incidents.

Last November, Biden thanked a first-grade boy for attending an event and offered him a personal tour of the White House.

"Meet me after this and I can show you the around the White House," Biden whispered while stroking the boy's arm and caressing his face. "Do you want to see it?"

Biden chatting with a child during bill signing
"Meet me after this, I can show you around the White House.” pic.twitter.com/ZjDOacyI9H

Fox News also has listed some of the incidents in which Biden has been accused:

Biden made a statement in April 2019: "In my career, I've always tried to make a human connection. That's my responsibility, I think. I shake hands, I hug people, I grab men and women by the shoulders and say 'you can do this.' And whether they're women, men, young, old, it's the way I've always been. It's the way I've tried to show I care about them and I'm listening." 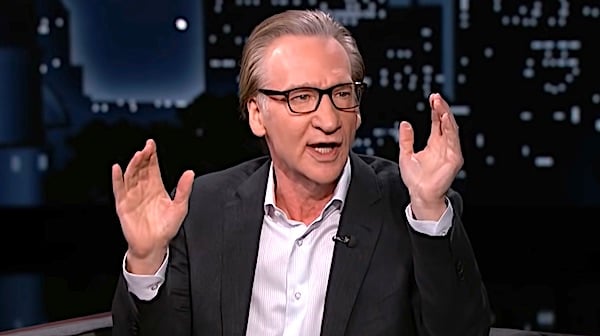 "He came very close, this close, to saying he was about to run [for president], though we still don't know if that's true. We do know it's true that his hands have been part of an exploratory committee for decades," Maher clowned.