The city of Phoenix is run by Democrats; the mayor has been a Democrat for years, and the city council is dominated by them. They refuse to help former city employees who contracted health problems – and some died – working around buildings with high levels of lead in the paint, in part because the statute of limitations to bring claims has ended. Problem is, these employees didn't realize all their health problems were caused by it until years later, when they'd spoken with each other and realized how many of them had developed similar serious health issues.

Ruben Lara was employed by the City of Phoenix Parks Department for 33 years. Between 1992 and 2003, he worked at a senior citizens' community center called South Mountain Community Center. He and 13 employees, including one named Leonard Parker, were responsible for painting the buildings using an industrial oil-based paint known as Enduragloss, which contained lead called wickersham. They used it on metal, including metal doors, door jams and window frames.

During a meeting in 1992, the main painter at the facility warned Lara's supervisor that using the paint was going to get Lara and others sick – including the public – and possibly lead to death. The supervisor disregarded the warning.

The paint was never reported to the EPA's office in San Francisco. The supervisor wasn't certified to use the paint, nor were the employees. There were supposed to be hazard signs placed near the painting operations, in order to keep the public away, which wasn't done. According to Lara, the paint remains in the buildings to this day.

On Jan. 25, 1996, Lara was rushed to the hospital because he couldn't breathe, and put in the ICU on a ventilator for five days in critical condition. Doctors told him that he almost died from the fumes.

The paint was also used in several parks in South Phoenix, on playground equipment like merry-go-rounds, monkey bars, as well as picnic tables.

When lead paint becomes old, it chips and peels, creating a chalky dust that can be inhaled. California settled lawsuits against paint manufacturers for $305 million in 2019 over lead poisoning caused to children.

While working at Phoenix's Nueve Park in 2001, Lara was again rushed to the hospital, unable to breathe. He was forced to stop working in 2003. Never a smoker, he now has lung problems, including COPD, and must take steroids, which cause bone loss. Parker developed kidney problems and is on dialysis. Lead paint is known for causing damage to vital organs such as the kidneys.

Another former city employee, Nettie Nelson, worked in a tiny front office at the South Mountain gatehouse entrance, which people drive by in order to access South Mountain Park. When Lara and Leonard painted that office, she complained about the bad smell making her sick and vomit.

Nelson was later transferred to the South Mountain Community Center – around more lead paint. One day when Lara was at that site, he noticed the restrooms were covered in plastic, closed due to asbestos. Nelson's daughter Kelly participated in a city program there. Now both mother and daughter have various ailments, including nerve problems, heart problems and respiratory illnesses, and Nettie is in a wheelchair.

Finally, Phoenix banned the paint. But not until at least 13 or more people Lara knows developed severe health problems. Three died from cancer. Others developed various ailments including tumors and nerve damage, which causes pain.

The former employees went to a meeting of the Phoenix City Council to ask for help, but Democrat Greg Stanton, who was the mayor at the time and is now in Congress representing much of South Phoenix, asked an assistant to throw them all out of the meeting instead of listening to their story. Lara went to the Industrial Commission of Arizona next, hoping to bring it to the attention of the Occupational Health and Safety Administration, but found his repeated attempts stonewalled, he believes due to corruption.

He's collected their responses. The FTC wrote back, "While the FTC is not able to intervene in individual disputes, the information you have provided has been recorded in our secure online database." The U.S. Consumer Products Safety commission merely told him they sent his report to the manufacturer. The EPA said they assist in situations involving residences or children only. When he asked for help from his Democratic state senator, Rebecca Rios, she accused him of merely complaining about COVID-19 symptoms.

He also collected copies of City of Phoenix invoices listing the wickersham. A material safety data sheet from 1999 for Enduragloss lists many of their physical ailments as a risk. 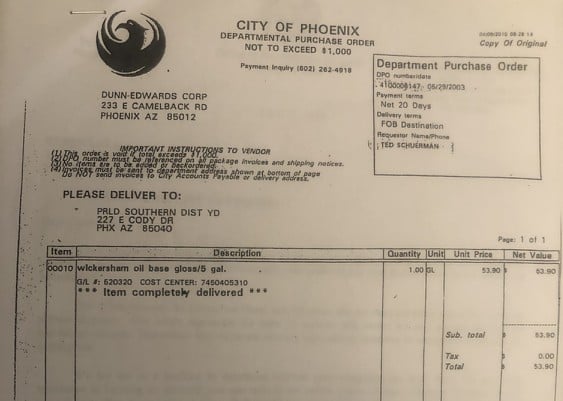 Lara filed a pro se lawsuit against Phoenix on June 22, 2020, which the city ignored. The judge threw out the case with no reason. Lara is now appealing, but it's an immense amount of work in a very complex area of law. He's been unable to find an attorney willing to represent the affected employees since no one dares to sue the City of Phoenix.

Lara just wants compensation for the misery he and others have experienced, including the families of those who have died. The City of Phoenix could do the right thing and make them whole. If they have money for massive graft, with Ponzi schemes funneling money to favorite employees and relatives, they surely can afford to improve the health-impaired lives of a few of their own whom they wronged. Democrats are famous for spending money, so why don't they care about spending money on something both Republicans and Democrats can agree on?

Rachel Alexander
Rachel Alexander is a senior editor at The Stream. She is a political columnist and the founder and editor of Intellectual Conservative. Alexander is a regular contributor to Townhall and The Christian Post. She was ranked by Right Wing News as one of the 50 Best Conservative Columnists from 2011-2017 and is a recipient of Americans for Prosperity's RightOnline Activist of the Year award.
Airbus is defying sanctions on Russia – for 'blood metal'
Candidates: Not enough experience or too much – which is it?
On abortion and school shootings, we're forgetting fathers
The left's despicable effort to take down election-fraud attorneys
Biden's big-business COVID bailout caused today's inflation
See more...