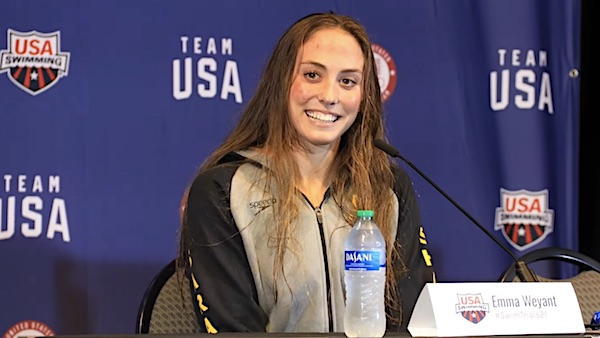 “We’re doing a proclamation, saying that Emma is the best female swimmer in the 500 freestyle because she earned that and we need to stop allowing or organizations like the NCAA to perpetuate frauds on the public,” DeSantis said. “And that’s exactly what they’re doing. They are putting ideology ahead of opportunity for women athletes.”

The governor’s office criticized the NCAA’s decision to allow transgender athletes who are biologically male to compete against women, according to a statement.

“Not only is it unfair for males to compete in women’s sports, but it is ridiculous for the NCAA to deny material reality — and demand that all Americans play along with their charade,” DeSantis’ press secretary Christina Pushaw told the Daily Caller News Foundation.

Weyant, an Olympian, won a silver medal in the NCAA Women’s 500 Free competition Thursday, second to transgender swimmer Lia Thomas, who competed on the University of Pennsylvania men’s team for three years before adopting a female identity. Thomas beat her by 1.75 seconds.

By allowing men to compete in women’s sports, the NCAA is destroying opportunities for women, making a mockery of its championships, and perpetuating a fraud.

In Florida, we reject these lies and recognize Sarasota’s Emma Weyant as the best women’s swimmer in the 500y freestyle. pic.twitter.com/tBmFxFE3q6

“In Florida, we stand for the truth. We will always reject the Left’s attempts to impose an absurd ideology that ignores the existence of biological sex,” Pushaw told the DCNF.

Florida passed the Fairness In Women’s Sports Act in early 2021, prompting a response from the NCAA, which allows transgender athlete participation in line with International Olympic Committee standards.

“Emma is the best female swimmer in the 500 freestyle because she earned that and we need to stop allowing or organizations like the NCAA to perpetuate frauds on the public,” DeSantis said in the proclamation. “If the NCAA was willing to actually ensure the integrity of women’s competition, she would’ve been crowned national champion.”